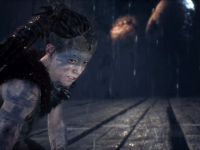 New gameplay for Hellblade: Senua’s Sacrifice has just released and it will make you question your own sanity in terms of Hellblade and Senua

I don't think I can say this enough, but with each new trailer for Hellblade: Senua’s Sacrifice I don't think that August 8th can get here soon enough. Ninja Theory just keeps impressing with it all and this latest trailer for the game does exactly the same. Yes, we have a new trailer for the game again here and while they skipped out on E3, this completely makes up for it all as it came close enough for it all. Sure, I'd have loved to actually play a small slice of Hellblade: Senua’s Sacrifice out there, but given that this is also an experience to be had outside of a story and game to be played, I'll take it for now.

In the following trailer, of course have some good headphones or sound system ready, we get another glimpse into the sanity of the titular character here for Hellblade. In fact, more than we've seen before, more of her sanity seems to be in question as it sounds like she may not know if she is dreaming, in someone else's dream, actually awake and experiencing everything, or any other multitudes of things as the swirling voices make it feel completely surreal and questionable on our end as well. Just listen close and see what I am talking about and if you have the setup as mentioned earlier then you may know even better than most as to what could be going on here.

Another interesting thing to note here is that this trailer is listed as the Hela trailer. Hela being an alternate name for the Norse goddess Hel and the ruler of the lands of the same name. This could just be a fun title for the trailer here from Ninja Theory for Hellblade here, but it could also be a full reference to a location Senua is or thinks she is in in this part of the game. It certainly looks and sounds like it based on what is being described, but it would be a bit out of place given the main mythology and religion that Hellblade: Senua’s Sacrifice is supposed to be tapping into. I may be off on that, but I found it interesting to note none the less and take in while we wait the next few months.

After three years of open and independent development, we’re excited to announce that Hellblade: Senua’s Sacrifice will be coming to PS4 and PC on August 8th 2017! Starting today, you can pre-order Hellblade on the PS4 for $29.99 and receive a bonus PS4 Dynamic Theme that depicts the iconic burning tree scene from the game.

How do you feel about this new trailer for Hellblade: Senua’s Sacrifice that we have? Were you able to hear all the weirdness that this part of the game has to offer or was it a bit lost on you? Do you think there is more to the trailer name than just being a name or is it stretch and nothing more should be looked at for it? Let us know your thoughts and opinions on all of this down in the comments and then discuss. For more on Hellblade: Senua’s Sacrifice though, be sure to keep checking in here on the site as we will keep all of those updates flowing out there as soon as we get them.