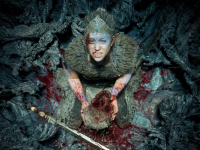 Hellblade: Senua’s Sacrifice has a release date now and it looks like the wait for Hellblade is almost over as it is only a few months out now

It has been one Hells of a past three years as we watch Hellblade: Senua’s Sacrifice transform into the title that we currently see it as now. It has gone through so many transformations and worry that it was going to be canceled completely from Ninja Theory have been there, but the wait is almost over. That and now we have a release date for when we can see Hellblade: Senua’s Sacrifice finally land on the PS4 and PC. Now we can all get excited and go out to pre-order the game digitally as it is now set with an August 8th release date on all platforms. All digitally with a few bells and whistles depending on the platform, but none the less we can see this amazing looking title in our homes soon.

There are a few key things to take away here for Hellblade: Senua’s Sacrifice and it has been something drilled in for a while now. Yes, this is a digital only title; which is not a big deal. It is also being slated as a mid-sized AAA title and due to that fact it is also being given a $29.99 USD price point. Given what we've seen for Hellblade so far though, it could easily be just as packed as some of those other AAA titles out there with a team a lot larger than the 20-person team they had to work with here. If it is like any of their other games, I am sure that this will be well worth the price of admission and the time to get right through it all. That and most of the money will go to them to build even more amazing titles in the future.

After three years of open and independent development, we’re excited to announce that Hellblade: Senua’s Sacrifice will be coming to PS4 and PC on August 8th 2017! Starting today, you can pre-order Hellblade on the PS4 for $29.99 and receive a bonus PS4 Dynamic Theme that depicts the iconic burning tree scene from the game.

If you do pre-order Hellblade: Senua’s Sacrifice, as mentioned, there will be a few little bonuses to go to you for shelling out the cash a bit early. For those who pre-order on the PS4 through the PS Store, you'll be getting one of those awesome dynamic themes for the system that shows off the iconic burning tree scene we've seen multiple times already. For those who take the plunge through Steam or GOG.com, your pre-order bonus will take form in a digital comic Hellblade: Senua’s Song. As you think, hopefully, this is a collaboration between Ninja Theory and Valiant Entertainment to expand upon the world of the game and its lore. Kind of the cooler of the two different pre-orders in my book. Especially after looking that the sample pages that we have for you just below. Renowned game development studio Ninja Theory and award-winning comic book publisher Valiant Entertainment are proud to announce that they have joined forces for Hellblade: Senua’s Song #1 – an exclusive Valiant digital comics short set in the mesmerizing and brutal world of Ninja Theory’s hotly anticipated adventure game. Written by Ninja Theory Co- Founder & Chief Creative Director Tameem Antoniades with art by multiple Eisner Award nominee Ben Templesmith, this first-of-its-kind collaboration between two of gaming and comics most acclaimed artistic forces is told in the form of a lavishly illustrated epic poem and will be available exclusively as a pre-order bonus for all orders of Hellblade: Senua’s Sacrifice placed on Steam and GOG.com before the game’s August 8th, 2017 release on PlayStation 4 and PC.

Are you as excited as I am to see that Hellblade: Senua’s Sacrifice now has a release date to look forward to? Did you expect it to be so soon or did you think it was going to be sometime in the Fall of this year to get the full launch? Which pre-order bonus looks more enticing to you and will that sway you on the platform you go with? Let us know all your thoughts on this and more down in the comments. Hopefully we will have more for Hellblade: Senua’s Sacrifice before the launch date. If we do, we will have it all here for you. Be sure to keep checking into the site here to see and experience it all.