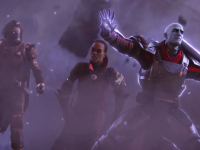 Yesterday was a huge day as we all finally got to see Destiny 2 live and in action. That is at least if you had a chance to tune into the live stream event that Bungie and Activision held that showed off way more than just a trailer or pre-rendered footage for the game. Pretty much what needed to happen here for Destiny 2 in all ways and it did nothing but impress. Not only that, but not only did it confirm again that it would be hitting the PS4 and Xbox One on September 8th, but it was also confirmed that Battle.Net would be hosting the official PC version of the game when it launches. Presumably a little after the console release date given a few of the follow up answers that were given out via social media.

We'll go into a few more of the finer points that Destiny 2 will be bringing us all here, but first we figured you are here to check out the new trailer for the game that shows off some amazing new gameplay. It was one of the many highlights to be enjoyed yesterday. So have a look and then we'll dig deeper into all of the ins and outs that have been discussed for Destiny 2 after that. Do enjoy.

From the makers of the acclaimed hit game Destiny, comes the much-anticipated action shooter sequel, Destiny 2. Experience an all new cinematic story campaign, innovative cooperative gameplay, and intense competitive multiplayer as you journey across unexplored worlds to discover an arsenal of weapons and devastating new combat abilities.

The first interesting part of Destiny 2 is the fact that Bungie is setting us all pretty much back to zero as it looks like our side lost the fight and have been stripped of all of their abilities. A nice way to make the sequel even terrain for all players and not just the veterans of the first title. Along with that, we will be seeing a lot of new weapons in Destiny 2, new armor, new exotics, and new sub-classes to enjoy. Not only that, but the weapon system has been redesigned to allow us to have a kinetic, energy, and power weapon at our disposal. That is of course when we aren't using any of the new Super Attacks that have been made just for us. Makes sense since we are going to be stripped of it all from before.

It's also been discussed that Destiny 2 will house an all-new cinematic campaign to be enjoyed with more cinematics than the developer has done to date. That was something I found a bit lacking in the first title and I am glad to see that getting revamped a bit. Especially since there are all kinds of new raids, co-op strikes, and Nightfall strikes being added in that would do well to have more story behind than "you are in the area." At least that is how it felt before and Destiny 2 totally has a chance to give me a new feeling about it all here in September.

Also coming to Destiny 2 will be not only new areas in the game's worlds to explore. Some of which are being touted as being twice the size of anything that Bungie has set up before; ever. That and whole new worlds and moons to explore in the quadrant that we can zip off to without the need of having to go into orbit each time. Another one the drags from before that Destiny 2 seems to be getting rid of in the best kind of way. I know I'll be glad to be able to hop from Earth to Titan to Io to Nessus without the extra few steps keeping me out of the game and back in killing with the rest of my friends.

Speaking of friends, Destiny 2 will also be getting clans into the mix now. Something that has kept the team weary from before given how this works out for other Activision IPs. But Clans will bring us in-game rosters, custom banners, and shared rewards for the group. Pretty much exactly what they do elsewhere but with hopefully fewer issues with humans. Which, if you are worried could happen, Destiny 2 will also have what they are calling Guided Games where one can temporarily join a Clan to experience what it is all about but have the option to not be locked to them. More or less you can get the benefits without the worry of inter-clan drama or you can take it for a test ride and hopefully meet some great players to join up with.

Now that you've heard and hopefully seen what Destiny 2 has to offer so far, how do you feel about the game? Does it look like it will be bringing in more players than before or will it be another short termed play session before moving onto something else? How do you feel about losing everything to start fresh so to be on the level of all the other gamers out there? Let us know down in the comments and then discuss. There will be more for Destiny 2 for sure and we will have it all here for you as it comes out. Keep checking back in here to be sure to stay up on all of the details and videos that Activision will have to offer us.