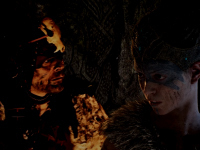 The latest developer diary for Hellblade: Senua’s Sacrifice has been released and it gives us a great look at Hellblade will integrate other character's faces

With each new update for Hellblade: Senua’s Sacrifice I have been overly impressed with the techniques and tech that is going into making this game come to life and hopefully pull off what the intent is. I know that Ninja Theory has a very specific idea they are going here for the game and have for a while. That is why when we get the latest developer diary for Hellblade here, I am honestly shocked at what they are doing again and in such a short amount of time and small team. All of which in the best way possible as this is the kind of thing that the industry needs to keep things fresh and striving for all to move forward. If only we had a date for when it hits the PC and PS4 now…

Posturing aside for now, before we dig into this new developer diary, it should be known that Hellblade: Senua’s Sacrifice is still being worked on by a small team and one of their focuses for in-game visuals was to go "all in" on one amazing character visually and then worry about the rest later. That's not to say that they aren't going to be giving us some great looking enemies and such, but that they wanted to make sure the titular character looked amazing as the rest could kind of be created with a bit more ease given their design and structure. If you've been following along with Hellblade then you'll know that the enemies we've seen don't really need fine facial animations and such.

That is all the enemies in Hellblade though and not the supporting cast. While technically the supporting cast could be all in Senua’s head, that isn't exactly how it all plays out in the real world and Ninja Theory needed to bring in some other actors to not only do the voices, but also the visuals for the game. It's not new that we see real video in video games, but here in Hellblade: Senua’s Sacrifice they have been captured to create other characters in the game and done so well that it is almost impossible to see where the gameplay and video blends. Have a look at it all in action down below in the developer's diary if you don't believe me here.

Hellblade: Senua’s Sacrifice — The Faces Behind The Voices

In Hellblade: Senua’s Sacrifce, Senua’s real story is revealed through her voices and visions. In this diary discover who the Hellblade cast are and see how the faces behind Senua’s voices are being brought to life in-game.

This is a technique that looks like it could not only be useful for Hellblade here, but so many other games out. Not only that, but it can be cheaper and faster for small teams just to capture a costumed human and bland it in just as we saw here than to fully animate them. At least when it comes to cut-scenes or pre-determined events. I honestly wouldn't have been able to tell the difference had Ninja Theory not said anything here given how well it worked. I think this has been the only time in the transparency of Hellblade: Senua’s Sacrifice that I wish could have been hidden from us as now I'll be looking for it. That is how it goes I guess…

Are you as impressed with this in Hellblade: Senua’s Sacrifice as I am or do you just want the game to be here already? Can you see the blending points in the video here now that it has been pointed out or is it so well done that you still can't believe what we have been told? Do you see this being adopted by other team s out there or will this stay rather niche just for this game and maybe a few others? Let us know what you are thinking down in the comments and then discuss. There has been so much for Hellblade: Senua’s Sacrifice and I know there will be more. Be sure to stay locked into the site here to keep up to date on all of it as it is shown off.