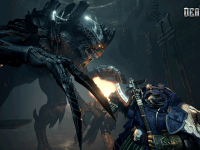 Since Space Hulk: Deathwing launched near the end of last year on the PC it has been met with a few mixed reviews but still seems to be holding strong with the core fans of the universe. Something I am going to guess is to the pleasure of Streum On Studio as they are still working on the PS4 and Xbox One versions of the game so that even more fans can have access to it. I was under the assumption a while ago that Space Hulk: Deathwing was going to hit all platforms at the same time and was a bit let down that it missed the mark. None the less, Focus Home Interactive has kept the funding going and now we can see about when the rest of the gaming world can gain access to it. Well, at least know that it is coming in Q4 of this year.

Yes, that does leave quite a bit of open time to see Space Hulk: Deathwing come to the consoles, but it is better than the "not at all" timeline that many people had figured when things went silent on that front. Even though it is a bit open though, it looks like a lot of major enhancements are also coming at the point as well as the PS4 and Xbox One will be getting what is called the Enhanced Edition of the game that will bring with it a few new items to be experienced as well as updates to make Space Hulk: Deathwing feel a bit smoother. It sounds like a remaster, but it really isn't; it is just a final version for the consoles that will be able to keep up with its PC counterpart rather well.

In addition to being 'enhanced' there will be some new features coming to Space Hulk: Deathwing and will be part of the console builds and a free update for those on the PC version. There will be a new multiplayer progression system, a new multiplayer class, new weapons, new skills, and new enemies. This will be above and beyond whatever else comes to Space Hulk: Deathwing during the time that Streum On Studio is working on the game in general. So I guess we can call the console the 'Enhanced Edition' even though it is more like the version of the game that has had many PC players test it out, give feedback, and then have additions and patches to make it a clean title. Kind of like a QA department but not..?

Space Hulk: Deathwing, the FPS from Streum On Studio set in the Warhammer 40K universe, will launch as an ‘Enhanced Edition’ for PlayStation 4 and Xbox One in Q4 2017. This edition adds exciting new content and features for players who dare enter the Genestealer-infested Space Hulk – all of which will be included in a series of free content updates for PC players.

The countdown to the Space Hulk: Deathwing Enhanced Edition begins today, starting with a fresh update for PC players. This latest patch focuses on more gameplay variety by introducing the Special Missions game mode to multiplayer. Special Missions, which have been added to Chapter 1 but are coming later to every chapter in the game, bring a new level of uncertainty for even the most hardened Terminator squads. Starting a chapter will generate a randomized sequence of missions and Genestealer spawns for a truly unpredictable challenge.

Streum On Studio are also excited to share a glimpse of just a few of the upcoming features players can look forward to in the Enhanced Edition:

Have you been playing Space Hulk: Deathwing and glad to see all of these enhancements coming to the game? Have you been holding out for the console version of the game and are glad to see that you'll be getting what the PC gamers have had but all in one shot? DO you find it odd to see how all of this is being given out or do you think it falls right into normal practice for video games? Let us know down in the comments and then discuss. As we learn more on this version of Space Hulk: Deathwing, we will bring it to you. Keep locked into the site here to make sure that you are completely up to date on all of it.