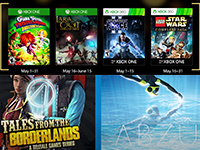 A new month is almost on us here with May and that means new video games that we are going to get for free. Well video games that you will get for free if you are part of the PlayStation Plus or Xbox Gold services. If you are then you may be in for a treat as the list of titles going live starting next month is here and we have it for you. Again we get to expand out titles on the Xbox One and PS4 without needing to make any extra spends at our local stores.

Well, if I go with my overwhelming fandom for this set of new free video games I have to go with the PS4 getting the better in the bunch here. Tales From The Borderlands is still one of my all-time favorite titles from the developer and I think everyone should have a chance to play it all. Such a fun title. Yes, this is even with the Xbox getting two more Star Wars titles in the mix for this month. If you are into those kind of video games and all. Who am I kidding? Of course, all us are into that kind of game.

Here is the list of games we will all get for our PlayStation systems starting on May 2nd of 2017.

PlayStation Plus May Games

Here is the list of games we will all get for our Xbox systems starting on May 1st of 2017.