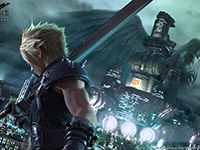 There are some rumors that have existed for ages. One of which is so old I don’t remember where I read it was that the third installment of Kingdom Hearts would be released in 2013. The other has been around almost as long as I have been alive being that a remake of Final Fantasy VII would be coming. In the past few years these two things have actually been confirmed.

If you reserved your copy of Kingdom Hearts III you would have noticed the May 2017 release date. On some websites there is a November 2017 date. On the other hand, it looks like you can still pre-order Final Fantasy VII Remake but no dates listed on any site. “We’re making steady progress on its production. While we are indeed working on it, I think we’ll have you guys wait a little longer for both Kingdom Hearts III and Final Fantasy VII Remake.”

All this is still up in the air as a leaked investors documents and comments game director Tetsuya Nomura puts both Final Fantasy VII Remake & Kingdom Hearts III's projected 2017 releases in jeopardy. While this is sad to hear that we might not get either game this year, I do respect Square Enix for not putting their games in a position to release unpolished with bugs and technical issues. He goes on to apologize, but you can hardly blame him as even on PS2 the graphics of most Square Enix games are nothing short of amazing. It’s this kind of dedication and hard work which has led many fans to fall in love with their games.

“I do apologize for that, but we’ll make up for it by making it into something that will meet expectations.”

He later states there will be a few surprises to look for throughout the rest of 2017. Most Final Fantasy fans will have plenty to tide them over. Final Fantasy XII: The Zodiac Age released last month and it looks like Final Fantasy may still have more DLC coming. One big question out of all this is what the Marvel IP title will look like. Hopefully we will get answers to these questions at E3 or, more likely, the Tokyo Game Show.

For players Final Fantasy XIV, the MMO Final Fantasy experience, they will be getting an expansion titled Stormblood in June. Most of the other things in the Final Fantasy 30th anniversary seem to be only in Japan; like a new manga and television show. Not to mention the weirder things like wine and forks.