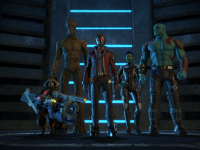 The wait for Guardians Of The Galaxy from Telltale will be over here tomorrow and in the normal manner we have a launch trailer for the game. If you haven't been following along with Telltale Games' exploits over the years then you may not know that this is common place for them. Everyone else will know that we had to wait until now to get to see some of the first episode of Guardians Of The Galaxy in action just before it drops tomorrow, April 18th, for the PS4, Xbox One, and PC. At least digitally. Those who want a physical version will still need to wait until May 2nd to pick that up.

Up until now we've known a little on the story we'll be guiding in Guardians Of The Galaxy and it will include the normal rogue's gallery of characters for the team, at least from the recent films, and the big bad we've all been waiting to do more than talk big and sit around; Thanos. Not a huge surprise there but do remember that this isn't tied into the films at all so there may be a few jabs and references to Guardians Of The Galaxy here and there, but this is standalone piece of work. It just happens to be hitting us when the second film is dropping so there will of course be the comparisons.

Guardians Of The Galaxy — Tangled Up In Blue

Marvel's Guardians Of The Galaxy: The Telltale Series is a brand new story of the universe's unlikeliest Super Heroes: Star-Lord, Gamora, Drax, Rocket, and Groot. In the wake of an epic battle, the Guardians discover an artifact of unspeakable power. Each of them has a reason to desire this relic, as does a ruthless enemy who is the last of her kind, and who will stop at nothing to tear it from their hands.

From Earth to the Milano to Knowhere and beyond, and set to the beat of awesome music, you wear the rocket-powered boots of Star-Lord in an original Guardians adventure, where your decisions and actions drive the story you experience.

To be honest, Guardians Of The Galaxy looks like it could have the potential to be on the level of Tales From The Borderlands for me in terms of Telltale Games' IPs. That one is by far the best in my eyes and with a similar cast, humor, and over-the-top nature they could do just the same. That is if I can get over the voice differences. That will always be an issue in a franchise where we have one group doing voices and another doing everything in a different way. Of course not a deal breaker at all but something that will have to be overlooked and ignored to fully enjoy this version of the Guardians Of The Galaxy.

Are you ready to dive into Guardians Of The Galaxy or will you be holding off to play it all in one straight shot? Do you think that they should have tried to work in a bit to the current films for a better tie-in or will it do perfectly fine on its own? Are you having the same issue with the voices that I am or do you welcome the new talent to it all? Let us know in the comments and then discuss. For more on Guardians Of The Galaxy and each new episode, be sure to stay right here as we'll keep it all coming as well as our official thoughts on the game as each new episode drops.