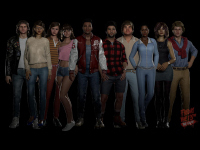 It's been a wait but here we go with Friday The 13th: The Game getting some more time in the sun. No, we don't have a release date for everyone out there as it is still set for Early 2017, but what we do have is a look at all of the counselors in the game that Illfonic and Gun Media have crafted side-by-side. All ten of our victims counselors are no present for Friday The 13th and all filling their specific roles that have been placed out there for them. The finer details on that have still yet to be disclosed, but at least we have a look at them as we had a look at all of the Jason versions already as well.

If you were part of the Friday The 13th beta then most of these characters will look about the same as you remember. The difference here is that there are the new ones in there that were still being worked on at the time of the beta as they were Kickstarter rewards and not just extra ideas from the team. This is also why we had so few male counselors in the beta and so many females as that is just how it all fell when the campaign was said and done. But now we have an even number on each side of the gender fence to murder play as so we can all stop our bitching for that and just look and hope for a release date here soon. Also, if you missed it before, here is a look at all of those great kills and new Jason versions we had a chance to look at from before for Friday The 13th: The Game. It is worth noting here that Illfonic has many more kills mixed into the game that have yet to be seen. A few of which keep getting teased by the people over at Gun Media so we can only think of how much more brutal they will be than what is just below. Then you can imagine pulling them off on the "new" counselors above to have that extra little Friday The 13th fun. I know I will…

Now that you've seen them all, which counselor in Friday The 13th: The Game has the look you like the best? Will that matter in the long run or will it truly come down to the stats for you? Were you hoping that "The Nerd" was going to look more stereotypical or are you glad it turned the way it all did? Let us know all those thoughts on this down in the comments and discuss. For all things Friday The 13th, be sure to stay locked into the site here. We'll keep bringing you every little bit that we can scrape together. Hopefully a solid release date soon as well.