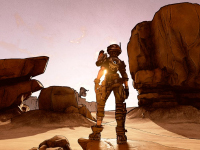 At GDC, the devs behind Borderlands had a new tech demo shown off that housed some new techniques the next Borderlands may be using

If you're a fan of Borderlands, and let's face it you most likely are as you sped in here, then you are in for a real treat here as we may have seen some of the technology that will bring that game to life. Straight out of GDC there was a panel where part of the team from Gearbox was showing off some of their new work with the Unreal Engine. All of which pointed toward how they are working on rendering techniques for future games, the previously announced new Borderlands title falls in there, and they showed off just how they were improving on their old system to make sure they could get their unique look perfect for the future. Yes, this is a "how the games are built" kind of update, but it has some interesting things peppered in.

You can see the presentation in full just below, but as it turns out, everything that was shown was in the vein of a Borderlands aesthetic. Not surprising but while it mainly focused on the techniques used to create that perfect outlined look, a truly impressive feat where they are now, there were a few points to things being production ready as it came to textures and character models. While none of this is indicative to a new Borderlands in terms of gameplay, they were very adamant on that, there are few questions being raised over whom the character shown could be. Especially since there was great care to obfuscate the face from everyone watching.

This could be a sign of an old character coming back in the next title or it could just be further pressing that this is a Tech Demo and showing off the face would have put the Borderlands community into a frenzy that their work would have been lost. It really could be either or at this point, or a whole new character, but the focus should be on the new techniques that Gearbox is working on and going to bring us in the near future. I have a feeling that E3 will be the earliest we will see anything in terms of an actual game for the Borderlands franchise but I won't discount that we will see some of these "production ready" assets mixed in as well. I mean, why do the double work just for a Tech Demo?

Gearbox's Randy Pitchford shows off the studio's work so far on the newest Borderlands.

If you want to dig deeper into the visuals that they showed off here, we have a few screenshots to look over and dissect as well. Maybe there is more of the future Borderlands game mixed in here than we thoughts, but no matter the case it does look like the team has a great thing going just for the rendering and I know I am insanely excited to see where it goes from here. A Tech Demo is what sparked off the Final Fantasy VII Remake after all and a new Borderlands game has been confirmed, so…

What are your thoughts on this Tech Demo set in the Borderlands setting, as it were? Do you think that there was a solid reason to obscure the character's face because of a new game or do you think more fans would have focused on the character than the new techniques as was the basis of the demonstration? Is the new look deviating too far from what you are used to for the franchise or is it the right level of advancement to keep it all fresh? Let us know down in the comments and then feel free to discuss. Once there is solid news on the new Borderlands, or any of their other updates really, we will have it all here for you. Keep checking into the site to make sure you see and experience all of it.