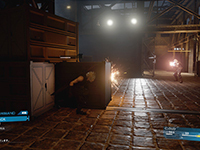 The wait for Final Fantasy VII Remake still lingers on as it still looks like we won't be seeing it this year, but that is only in a final form as we have a few new screenshots for the game here. Not only that but a little other title that Square Enix is working on in the way of Kingdom Hearts III. You know, the next two most anticipated titles from the developers now that Final Fantasy XV has released and is in DLC and update mode only at this point. Nut enough on all of that. Let's move right along into the new shots we have here to gaze upon. That is why you are here and you don't need to make any excuses.

While I don't think this is the showing on Final Fantasy VII Remake that we've been promised for the year so far, this is a look at where the games are out of the Magic Monaco 2017 event that just took place. It does look like there has been some great advancement on Final Fantasy VII Remake since the last big trailer that we saw last year, and this included something that looks like a new cover system for the game that looks a lot like the one we just had. Given how the combat and structure of Final Fantasy 7 is being changes a bit as well as the visuals, this make a whole lot of sense even though it looks to be out of place for all the nostalgia that has the game truly hyped.

While the Final Fantasy VII Remake shots do look to show off a bit more for the game, the one shot we have for Kingdom Hearts III here is more or less just a reminder that the game is coming. It has a Hearltess and Sora attacking but outside of being crisper and higher definition, it could be mistaken for one of the past titles if we didn't have word that it was for KH3. I'm not saying this is a bad thing as I loved the structure from all of the other games, but it really doesn't feel as "new" as we have here for Final Fantasy. None the less you can see all of them below and be the judge for yourself here.

What do you think about the new screenshots we have here for Final Fantasy VII Remake and Kingdom Hearts III here? Does it look like the cover system from the most recent title is making it in here or is this just a scene that will play out to another combat scene? Do you agree that there was very little shown for Kingdom Hearts here or did you spot more in that one shot that we were able to catch? Let us know down in the comments and then feel free to discuss as you wish. For more on Final Fantasy VII Remake and Kingdom Hearts III, stay right here. Hopefully we will have a whole lot more to show you this year as we wait for the games to eventually release.