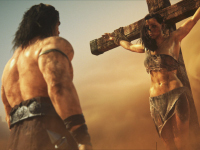 A new cinematic trailer for Conan Exiles has just dropped as well as details for a Conan Exiles: Barbarian Edition that can be pre-ordered

Only a few more days and PC gamers will be getting that early access to Conan Exiles to see what the hype is all about as well as help shape the game into something that can sustain their interests for a while. January 31st is the day still, unless you live in the NA region as it looks like the 30th is now the day that Funcom will turn on the flood gates at 9pm PST. You have to love those time zones and the developers not wanting to have to shift their sleep schedules to ensure Conan Exiles starts up and everything. At least for those gamers on the west coast of North America as the official start time in Europe is still 6am on the 31st. But enough on that.

Now that we know when we can hop into Conan Exiles, let us take a look at the next addition to the video side of the game in terms of a new cinematic trailer for the game. Yes, this is a cinematic trailer and no gameplay is shown, but it does show an interesting side of the game that we will all get to focus on here. That and a bit more on the story of where our exiles are coming from and just why they need to survive, build, and dominate in this harsh world. You know, besides the actual game side of it all as we aren't watching a historical document here.

On top of all of this here, there is also word on just how you can enter the Conan Exiles early access and it comes in two different ways. First we have a $29.99 USD version that will get you the game and access into everything here in a few days. Then there is the Barbarian Edition of Conan Exiles that not only gets you into the game but also brings you a lot of little extras like digital comics, a pen and paper RPG, and an exclusive t-shirt for the game. Of course there is more to it all but I'll leave that for you to see just below and then figure out which version of Conan Exiles you'll be picking up here. What do you think about that new cinematic trailer for Conan Exiles that we were just given? Doesn't it hit a lot of things right on the point in the recent days? Do you think that the Barbarian Edition will be worth the extra cash that it costs or will you be sticking to the standard edition of the game? Let us know everything down in the comments and then feel free to discuss all you want. As more on Conan Exiles flows in here, we will get it up on the site for you. I know there is a whole lot more to come and I can't wait to share it all with you.