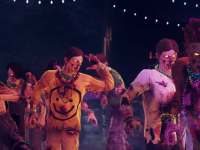 A new trailer for Call Of Duty: Infinite Warfare's next Zombies DLC has shown up so we can see how to rave Call Of Duty style with said zombies

Hopefully in the mix of all of the other games launching and getting updates here you haven't forgotten about Call Of Duty: Infinite Warfare and the DLC that still needs to get out there for the game. The next big batch of it all is landing, on the PS4 at least, on January 31st here from Infinity Ward and of course that means that the Zombies mode will be getting another huge batch of content too. Hopefully we will get word on when Activision will bring all of this to the Xbox One and PC fans of Call Of Duty, but for now this is where we are with it all. Well, if we ignore the new trailer that was just released for it all.

We can now see a bit of new gameplay for the next chapter in the Call Of Duty Zombies story here as we enter the "Rave In The Redwoods." That would be the title of it all as we catch up with our heroes and heroines as they are transported to the set of a 90's slasher film where all of the undead have been partying down. The voices of the characters have stayed the same but they all have a new look to fit in with the new era in time as well as the setting. They couldn't keep their old threads when entering into a 90's horror film when they were just in the 80's before.

To top all of this off, it looks like there will be yet another celebrity famed for the era mixed into the fight here in the way of Kevin Smith. Yes, the same Kevin Smith who made a name for himself back in the 90's will be in Call Of Duty: Infinite Warfare now in terms of what sounds like an AI controlled character helping the lost teens, and himself, escape the madness of Willard Wyler. Not the exact choice I would have gone to for this but I am not working at Infinity Ward nor making any calls. None the less he will be there voice and all; running and jumping just like the real world version proclaims that he can't.

Call Of Duty: Infinite Warfare — Rave In The Redwoods

After escaping the terrifying Zombies in Spaceland, our heroes are transported to an abandoned campground… the perfect site for Willard Wyler’s next horror masterpiece. Set in the ‘90s, the four actors find themselves in brand new roles, along with some fresh new threads. Together, they’ll team up to take on endless hordes of raver zombies and the mysterious Slasher, who’s on the prowl to add more “trophies” to his collection. With the help of some brutal new weapons and even director Kevin Smith (!), our heroes just might be able to put an end to the madness in the Redwoods.

Rave in the Redwoods arrives first on PlayStation 4 on January 31, 2017 in the Sabotage DLC pack.

Are you ready to give the new Zombies DLC for Call Of Duty: Infinite Warfare a go or have you been bogged down with so many other titles that you still need to find the time? Do you think that we will keep progressing with these ten year jumps in future DLC packs or will we see larger jumps to offset some eras without great iconic looks? What do you think about Kevin Smith getting added in here? Let us know and then discuss down in the comments. As more on the DLC for Call Of Duty: Infinite Warfare is revealed, we will have it here for you. Be sure to try and stick around for that; although I have a feeling we are all going to be a bit on the busy side now.