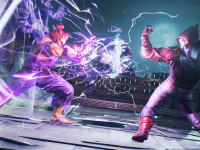 A lot of gamers have been sitting and waiting to find out when Tekken 7 would be coming to the PS4, Xbox One, and/or PC and it has been one long wait to find out. So far Bandai Namco has only shown the game off in its full arcade box form and little has been discussed on the home versions of the game. Now it looks like we have June 2nd to look forward to as that has been the date set for when Tekken 7 will be coming into our homes across the globe. Seems like a long wait but it is almost over and we only need to make it a bit longer. We can all do it I think. At least I'd like to think that at the very least.

With the launch of Tekken 7 in June we will also be seeing the new gameplay mechanics and story mode that have been all the rage here for the game so far. There will also be the expanded roster for the game mixed in but the big change is the new Rage mode that can quickly turn the tides of a match in your favor; well at least if you are the one getting your ass handed to you. This new mode will give you a few other options and abilities to use in Tekken 7 that will give you some massive combos or massive damage outputs so you can smash your enemy after they have made you look a fool in the digital world of the game. You know, because no one like to lose that badly when they have all kinds of hidden weapons and abilities they have yet to unleash.

Tekken 7 represents the final chapter of the 20-year-long Mishima feud. Experience the epic showdown to the emotionally charged family warfare between the members of the Mishima Clan as they struggle to settle old scores and wrestle for control of a global empire. The 7th King of the Iron Fist Tournament has begun and the world now hangs in the balance!

So what’s new in Tekken 7? Besides a dedicated story mode and an expanded roster of new characters, there’s also some brand new gameplay mechanics including…

As your life bar depletes it will eventually start flashing red, indicating you’ve entered “Rage” mode. Once in “Rage” your character will deal more damage as well as gain access to two all-new devastating moves: the Rage Art and Rage Drive!

A super powerful armored attack that allows you to absorb hits and power through an enemy assault that can turn the tide of the match in the blink of an eye. The Rage Art provides players an easy comeback mechanic when they are far behind in any given match.

While not as destructive as the Rage Art, the Rage Drive is a strategic alternative that unleashes a devastating combo that will punish any opponent.

Also an armored attack, this move will power through most attacks and shift momentum in your favor. The Power Crush can be risky if thrown out carelessly, but if timed properly, it will give you a physical and mental advantage.

There is also a collector's edition of Tekken 7 that has been announced and ready to be pre-ordered out there. This version will have a 12” by 18″ figure depicting Kazuya and Heihachi locked in an epic showdown. It will also include a special collectible Steel Book and the official Tekken 7 soundtrack. On top of all of that, no matter which version you pre-order you will gain access to use Eliza in the game as a nice little extra character. Seeing as the Season Pass will also bring along new characters, game modes, and stages I am going to guess that the game will also focus on DLC characters from the go forward even though they may not fit into the overall story of the game.

Are you ready to dive back into the world of Tekken 7 here in June or has the wait been too long and interest has been waning? Do you see these new gameplay features adding or detracting from true skill in the matches? Do you think that this will be another fighting game filled with constant DLC characters or will it truly only be for these few Season Pass updates that we'll get? Let us know and then feel free to discuss down in the comments. For more on Tekken 7 please stay tuned here as we'll keep all of the updates popping up here as we get our hands on them. Hopefully now that there is a solid date for the game they won't be too few and far between.