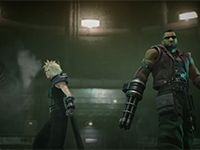 Here we go with just a bit more pointing to the fact that we may be seeing Final Fantasy VII Remake at some point this year. This isn't the first time something has popped up like this of course but to the dismay of Square Enix it looks like retailers just can't stop letting things slip out a bit earlier than they should. Like I said, this one also shows that we could be seeing the first episode of Final Fantasy VII Remake this year as there are now options to pre-order it all right now. At least if we take what just popped up on the Australian EB Games website.

As you can see below, Final Fantasy VII Remake has now been listed with a placeholder price that also includes the date of TBD 2017. Of course this doesn't give us a solid date or a guarantee that it will be launching in the year but it is generally a good sign given all of the other rumors and news that point to it. This is the year that the franchise has its 30 year anniversary and other sources point that Final Fantasy VII Remake will be coming alongside the remaster of Final Fantasy XII: The Zodiac Age so… To me it would make sense that Square Enix would give us at least the first episode of Final Fantasy VII Remake during their huge event coming up soon. Given that the whole game is going to be episodic and it would have been announced for about two years by now I think it is in the realm of possibilities that episode one could be ready. Then again I'd rather wait until most of Final Fantasy VII Remake is ready so we don't have a huge break between each episode like we do with other franchises that do the same. I know I'd be upset if we had to wait months between each episode.

What do you think about this possibility for Final Fantasy VII Remake to hit this year? Do you think this is a good indication that it will be out this year or is it all just a placeholder and not just for price? Are you going to wait for the full game to be released or will you be playing each episode on their own? Let us know your thoughts on all of this down in the comments and then discuss. For more on Final Fantasy VII Remake as we get it though, be sure to stick around here as we will have it up on the site for you as soon as we can.

Anon Commenter [ Saturday, 7th of January 2017 - 02:47 PM ]
I know waiting for each episode is going to suck, but it's most likely going to be a year or two between each one.
Go ahead and login or register