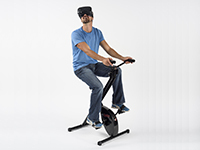 It is a rare instance that we have something here that is about health here but seeing as gaming is getting mixed in we had to have a look at the VirZOOM during CES this year. More so when you look at it as we are getting some of the first vSporting events out here as well. That was at least one of the goals that aimed to be met with the mixture of VR, a stationary bike, and the VirZOOM system all mixed in. CES really is a place where wonders are see and made and now we get to see a VR competition in action with a lot of exercise mixed right in.

You can see the first event hosted just below in our own VR setting as it seemed fitting to cover this CES event the way that VirZOOM and the HTC Vive was letting us play. Have a look around and see just what the hardware and software for it all were able to create and get everyone excited about.

Users will be able to use the resistance buttons on the bikes to control gameplay when the VirZOOM Module is plugged into the console and enabled.

This wasn't the only reason for all of this here at CES though but it was definitely the more exciting part of it all. At least for the company as it looks like the VirZOOM will also be partnering up with other Life Fitness equipment to allow an easier time for more players and escapists to get that extra little fix and some exercise too. More and more CES style news though instead of gaming stuff here as it seems that the SDKs to build more experiences with Unity now and soon Unreal. While the above demos do sow some potential, could you imagine what developers could do to bring us some true extra fun and games to play while working up a sweat? Yea, now you are thinking about it.