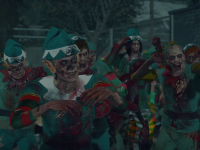 While Dead Rising 4 has only been out for a few weeks now it would seem odd that we would be seeing the first bit of DLC mixed into the Season Pass to release but none the less it is here. It is a season of giving and seeing the worst in humanity come out at times so it is fitting that Capcom bring us this bit of paid DLC just to let us keep slaying through the holidays. I know we all wish that this bit of DLC for Dead Rising 4 would have been free, especially given the holidays, but at least it looks like it is adding in a bit more than a few little skins and extras just to keep with the holiday theme. Although given the game's setting I can see this being a thing throughout the entire cycle of Dead Rising 4's life.

You can get a good look at it all running down below but as is expected, the zombies in Dead Rising 4 are getting festive with new costumes and gear upon them. We are also going to be getting a few new weapons that also fit into the look and feel of the holiday. We are also going to be getting another fun vehicle to drive around and crush more zombies with. Even though it is pretty much nothing more than a motorcycle with antlers I can see how all of this can be easy fun to have and keep us wanting more Dead Rising 4 in the near future. That is unless all of these updates and DLC will be like this and then I can see some of that Black Friday rage coming back out for some of you out there.

Have a look at it all and be the judge for yourself. Capcom has put the Dead Rising 4 DLC out there and it should be ready to download and/or purchase via you preferred store by now. If not by the end of the day when it is all updated for the holidays. Maybe wait until after you open your stockings though to look for it as you may be getting a nice little gift there and wouldn't want to have jumped the gun on someone's gift now would you?

What do you think about this DLC for Dead Rising 4 that we now have? Does it live up to the standards that we should be looking at for games like this or is it a nice little hold you over until the big guns come out, hopefully, next year? Do you think that we will get some solid new story stuff mixed in here soon or will it be costumes and weapons for a while? Let us know what you are thinking down in the comments and feel free to discuss. For more on Dead Rising 4 as it comes, in all of its forms, be sure to stick around here. We'll bring you all the fun little bits that we can to keep you flowing in zombie killing fun.

Anon Commenter [ Tuesday, 20th of December 2016 - 08:32 PM ]
I would hope it will be the only of its kind because if they would have packed a few more weapons and costumes it would have been a whole lot better.
Go ahead and login or register