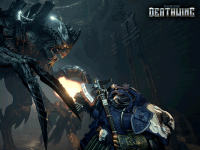 It looks like the day is almost here that Space Hulk: Deathwing is going to release. After its recent beta it was hit with a very slight delay but it seems that Streum On Studio hammered all of that out as the game is hitting PCs here this week. Along with all of that, we also have a new trailer for Space Hulk: Deathwing to show off all of the winning points that Focus Home Interactive wants us to focus on. Not that there aren't many more but this is just how launch trailers usually roll and it doesn't leave a lot of us wanting…at least unless you don't plan on picking up the game at launch after this. You can be the judge though.

If you are looking to get Space Hulk: Deathwing on the PS4 or Xbox One, you are still going to have a bit of time to wait. There is still no launch date for the game on those platforms; well at least outside of 2017 at some point. Again this begs the question on my end for the time gap given the engine it was developed in and how all of that usually goes, but I guess that's why I am here writing about games and not actually behind the scenes building them. Someday…someday…

I wish there was more to say here for Space Hulk: Deathwing but I guess we've had everything so far that they wanted to cover before the December 14th release date. Now we just get the nice trailer and a few days to wait. No complaining just yet.

Space Hulk: Deathwing is a First-Person Shooter based on Games Workshop's classic Space Hulk boardgame, set in the universe of Warhammer 40,000. Developed on Unreal Engine 4, the game tasks you – in an extensive solo campaign co-written by Black Library author and Dark Angels specialist Gav Thorpe, or in a challenging coop mode up to 4 players – with facing the Genestealer swarms in the depths of a gigantic amalgamation of interstellar debris and wrecked spacecraft know as a Space Hulk. Unlock and equip yourself with the most powerful weaponry available to the Imperium, master destructive Psyker powers, and command your squadmates in battle to defeat the Xenos threat.

Are you excited to give Space Hulk: Deathwing a good play here soon? Did you have a chance to play the beta for the game or will you be going in completely fresh here? When do you think that we will see the console release in 2017 or do you think that will be scrapped? Let us know your thoughts on all of this in the comments and feel free to discuss. For more on Space Hulk: Deathwing keep your attentions right here as we'll keep all the information and visuals flowing on out.