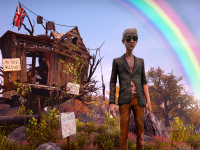 Back in July the Early Access for We Happy Few went underway for a few of the platforms it will be heading to at some point. Maybe you bought in or maybe you didn't depending on your faith in Compulsion Games, but the option is still there and I know many, myself included, have had a blast with it so far. Yes it's had it bugs and issues but it is a game in progress and we are here to help shape We Happy Few into something we want to fully experience when all is said and done. At least I know I do. That is why it is awesome to see that we are getting a nice little update to it all that fixes some major bugs and also continues on the narrative just a bit more.

There are a lot of updates coming to We Happy Few in the Clockwork update and you can see them here if you wish. There is a lot of minor things listed but some of the larger items are things like a new Conversation Mode that will make it so the world, and yourself, can't interact while the scene is playing out. It's a mixed thing as it does limit you from being able to attack NPCs while monologuing but it does mean that citizens can't attack you while you are listening. All so that we can get a better narrative in the end of it all and not have things go off the rails like they do in the game. I for one like this.

There are also new ways that Quests are being tracked and other art and animation updates for this version of We Happy Few. Standard stuff for an update and such. What is interesting though is that there is a new Shelter in the game that helps explain how Arthur got to where he is and fixes some of the confusion that has all caused. To be honest I just kind of let that go as this is still an Early Access and such, but enough fans asked Compulsion Games to give them more and they have obliged. Good on you I guess but I'm not going to demand things until closer to the final version. Maybe they will have the story for We Happy Few completely ironed out before that, but I want the full narrative and am just glad to experience what is there so far.

We Happy Few — A Clockwork Update

The team at Compulsion Games has been hard at work improving We Happy Few and is today launching a set of major optimizations called the Clockwork Update, which introduces a new tutorial area, improved encounters during conversations and quests, a visual overhaul in the village of Hamlyn, and more.

This new patch and update for We Happy Few is currently available to download for those who have the game in Early Access on Steam, GOG, and the Xbox One game preview. Most likely by the time you get home from work it will be all patched up and ready to go. Although it will require you to start a fresh game as all of the old stuff doesn't blend together all too well anymore. That shouldn't be a huge issue for anyone who is still enjoying We Happy Few in the mix of all of the other titles competing for our time. I know I'm ready to get another fresh start for it all.

Are you part of the Early Access and excited to see all of these new features and fixes for We Happy Few go into action? Are you still holding out until the final build so you don't spoil any of the story as it looks like it is slowly being let out there? Do you think that all of this will get another huge overhaul or have they found their perfect medium so they can focus on getting us into a full narrative mode? Let us know your thoughts on it all down in the comments and have a happy discussion. For more on We Happy Few as it comes, we will have it here. Be sure to check in often to make sure you are keeping up to date on everything.