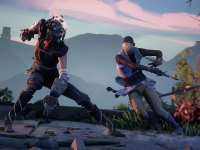 Maybe you remember and maybe you don't, but back in May we had a look at a new title called Absolver. There has been some time from then to now so it wouldn't be a shocker if you forgot. This is a new title from developers Sloclap that is slated to hit the PC, Xbox One, and PS4 sometime next year. Absolver is an online multiplayer combat RPG focused mainly on melee combat and during PSX we were able to spot some new gameplay. All of which fresh from the main keynote that took place earlier in the event but now is here for us all to see and get reacquainted with. Although those PS4 fans will obviously have something more to be excited about if Absolver tickles their fancy.

As it turns out, Absolver is coming to the PS4 as it will be bringing with it all the extra bells and whistles first to the platform. Yes, there is going to be timed exclusives as I always read "exclusive content at launch" as a timed thing. Maybe Devolver Digital has cut a deal to make the content truly exclusive but when you have a timeline mixed in it almost always means it will be out there for all at some point. Sadly, there is no real information on what this content will be currently but know it is going to be coming.

For now let us put all of that aside and get back to what we really came here for. Some sweet, sweet new gameplay for Absolver. At least we can have that for now without the need of a specific machine to run it all. Unless you are still living in the early 90s and still don't have a system that can run a basic YouTube video. I have no sympathy for you if that is the case. Get with the Gods damned times.

Absolver is an online multiplayer combat RPG where players are placed behind the mask of a Prospect under control of the Guides, the new rulers of the fallen Adal Empire, who have placed you here to determine your worth in joining their elite corps of Absolvers.

Was the new gameplay for Absolver all that you wished it would be or do you still need more to make your choice? Do you think that all of the exclusives at launch will stay exclusive or will Sloclap make it to move to all other version of the game? If so, how long out do you think it will be before we are all on the same version of the game? Let us know down in the comments and discuss as you will. For more on Absolver as it comes, be sure to stay right here as we'll keep bringing all of the new and updates and all with our own little thoughts.