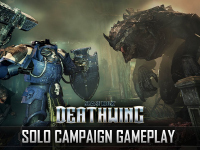 Up to now we've seen a lot of gameplay for Space Hulk: Deathwing and given that the game is hitting the PC on December 9th it would make sense that we wouldn't see much more until after that date. We would all be wrong though as it looks like Streum On Studio and Focus Home Interactive have opted to give us a nice long bit of gameplay to look at. In fact, we have a nice long seventeen minute video of the solo campaign of Space Hulk: Deathwing that has been left in its raw form without all of the usual clean up to make the game look amazing. Isn't that nice of them. Now we don't have to weed out much outside of them selecting this mission to truly show off the game in its raw form.

It doesn't look like there is any indication of where in the grand scheme of things this missions falls in Space Hulk: Deathwing so there is a good thing there. That means for those purists out there that there is little to be spoiled here unless you are going to memorize the layout of the ship the Deathwing are clearing out. So I guess there could be that but it really only shows off a lot of monster killing and bullets flying. There are also a few of the special and melee attacks to be seen but as this is unedited footage there is no real description of what is going on. I guess only the hardcore fans of the franchise will be able to figure that out. At least that is my guess.

In the solo campaign you play as a Librarian of the Dark Angels' 1st Company, the Deathwing, taking on swarms of Genestealer in the Space Hulk Olethros with Storm Bolter and Force Sword in hand. The Librarian is a Psyker, granting him access to powerful psychic abilities such as chain lighting, a powerful lightning bolt, which arcs between multiple enemies; and Shockwave, which blasts enemies back from you. You will need to utilize the full armory of the Deathwing company, your powerful psychic abilities, as well as the squad members under your command to fend off the xenos threat.

The Genestealers adapt their behaviour, based on their numbers, their type, and your actions. Commanding your teammates to cover you, block doors to prevent genestealers from flanking you, heal you, or hold a key position, is vital to survival in the depths of the Space Hulk. By playing the campaign you also unlock new weaponry for use by you and your squadmates, along with gaining experience to spend on three skill trees to unlock powerful new abilities.

It does look like there could be a little more polish placed on Space Hulk: Deathwing after seeing this footage though. At least in terms of the voices and the communication. It just doesn't sound like the team is truly in these huge hulking armors and communicating through them. At least it doesn't to me. It just sounds off. That and the fact that the responses that are given look to come sometimes after the action is already complete also make it feel like there could be a little more work placed on the game. This could just be me though. I guess we'll find out when it hits PCs in a few weeks and then consoles at some point next year. Maybe that is part of the reason there is a delay for those platforms.

What are your thoughts on this new video for Space Hulk: Deathwing? Does the audio sound a little off to you too or is it just me? When do you think that we could see the game come to the PS4 and Xbox One given that it is planned but no date is set just yet? Let us know all of your thoughts on this down in the comments and feel free to discuss it all there too. For more on Space Hulk: Deathwing be sure to stick around here as we'll keep bringing you all of the new updates that we can get our hands on as we get closer to the release date.