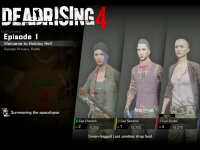 You wanted more for Dead Rising 4 and now we have that little bit more for you. In fact, it's a lot a bit more as we have our first real look at the four player co-op multiplayer mode that Capcom is bringing with the game here on December 6th. Did you not know or expect there to be this mode in Dead Rising 4? Then you are in for an even extra amazing showing as this first look shows off what we should expect here in the game. Of course though it does look like it is complete split from the main story and its own beast. So you may want to hold that excitement a little bit until you are fully up to speed.

As it looks, we will get to take on the roles of a few characters that Frank meets during the main story of Dead Rising 4. We will get to take them on episodic multiplayer missions that span the course of two in-game days. During those times we will have our own little missions and events to complete and rank up and fill out our multiplayer specific skill tree. On the second day of the mission we will have the option to summon a boss fight that will land us a harder time in the mix of it all but also give us some great bonuses for completing; outside of the normal pride we feel when taking down the big bads in Dead Rising 4.

More or less that is the gist of it all. You can see it all in action in the latest First Look that Capcom allowed out there and we have for you just below. I have my concerns on how it is all being presented and that we can't see this move over into the core story mode of the game but it is at least something. I just hope that we don't get nickle and dimed down the road to keep these missions flowing and expanding on our overall Dead Rising 4 experience. Not that this is something planned but I can see it happening if it was so chosen.

IGN gives you a first look at the four player co-op coming to Dead Rising 4.

What do you think about Dead Rising 4's new co-op multiplayer here? Does it make sense that it is episodic and we can only summon a boss after the first day is over? Do you think it is a good move to keep the multiplayer skill tree and single player skill tree separated? Let us know what you are thinking down in the comments and feel free to discuss. As more on Dead Rising 4 is revealed up to launch you can rest assured we will have it here. Be sure to stay tuned in here as we'll keep pumping out the great information as it comes.