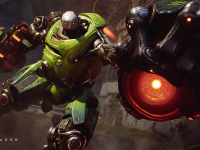 Another three weeks have come and gone and that means that it is time for yet another character to add to the roster of Paragon and this time we have a giant robot named Crunch. Yes, Crunch and what do you think this character likes to do? The joke is on you if you said crunch things as it looks like Epic Games has made this character like to punch. So very two dimensional for Paragon but maybe there is more to Crunch than we see. We'll find out on November 15th when this new face is added to the PS4 and PC rosters though. Hopefully this isn't a sign that they are slowing down their "every three weeks" ideas.

You can see Crunch in action below, just like all of the other characters added to Paragon, as well as see a breakdown of the special moves and punches Crunch will be able to perform. What does strike me as interesting is the opening to the character reveal as it definitely takes on the classic fighter set up and not the MOBA we've grown to love in Paragon. It was most likely just a fun way to show the character off but what if there was a one on one fight system built in for Paragon on top of the MOBA? That would quickly give us two different games all bundled up in one. Not to mention that it looks like it would work insanely well.

Enough chatter though. Here's a look at Crunch before next week's Paragon update. Have fun and be on the lookout for more characters as we start counting down the next three weeks until another new face joins the ranks.

Crunch is a melee fighter (Fury/Order) with a unique combo system. Utilizing each of his abilities, Crunch is capable of fluidly chaining combos together to quickly scrap his opponents.

What are your thoughts on Crunch here for Paragon? Did we need another melee brawler type in the mix or do you think it will blend in perfectly? What are your thoughts on the 1v1 fighter set up and if it would be fully implemented as a side game here? Let us know all the thoughts you have down in the comments and discuss. As more on Paragon comes out and new characters are added we will have the information here. Be sure to check in often to make sure you don't miss out on a single update that Epic Games is willing to give.