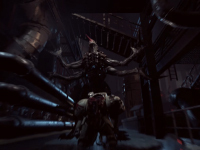 Good news for those fans of Warhammer 40K as we have yet another video here for Space Hulk: Deathwing to show off and get you all hyped up for this game to hit the PC on December 9th; the PS4 and Xbox One will see it in 2017. None the less here though, we have yet another look at the game and how much detail that Streum On Studio has put into the game to make it feel "true" to the universe that the game is set in. I figured this would have been a given since the start of it all but who am I to say we shouldn't get more gameplay footage for Space Hulk: Deathwing as we wait the next few weeks to get the game. It does look damn impressive.

As the narrator here will explain, the team took their time down to even the smallest detail of character and level design to make sure we felt right at home in the game and could recognize everything in Space Hulk. At least for those diehard fans out there. But the thing that is most interesting here is the AI structure that is being claimed here. Each enemy unit will have their own system set up to react in various ways and this includes the numbers in their swarm versus your numbers. If this plays out as explained here, each play through of the game will be drastically different as you plow through the game world and dwindle down the numbers of the horde around you.

Outside of that fun stuff there isn't much more. It is just nice to get to see Space Hulk: Deathwing in action yet again; I'm not sure I can say this enough here. Have a look at the latest trailer for the game here and then sit back and wait. It's not that long for those who are joining the ranks on the PC side of things. The console people may need to wait at least a few more months if the usual estimates are to be used here.

Enter the Space Hulk, introducing the developers' meticulous attention to detail and introduces the plot of its campaign, playable in both solo and coop.

Each Space Hulk is an amalgamation of ancient ships and space debris, and Olethros is filled with lore from the 10,000 years since the dawn of the Imperium to the 41st Millennium. You will be exploring Black Templar ships, troop transports, and even pirate vessels that were lost in the Warp and became part of the Space Hulk OIethros' bowels. Streum On Studios made sure that every inch of the colossal ships, each corridor and each room, contains highly detailed designs, unique architectural styles, and references to Warhammer 40,000 history.

Do you have any new thoughts on Space Hulk: Deathwing here with the new footage we have here? Do you think that the AI will be as diverse as is mentioned here by Streum On Studio or is that just wishful thinking? What about that attention to detail that we can already see here in the game? Let us know what you are thinking in the comments and feel free to discuss away. As more on Space Hulk: Deathwing is released by Focus Home Interactive we will have it here. Be sure to keep on the lookout for that; especially if you planned on picking the game up on the consoles.