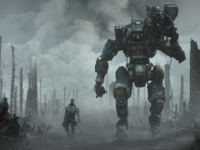 It seems like this is the week of live-action trailers as Titanfall 2 now gets the treatment here as a few other games have had. As with all of the other live-action trailers for video games I question "why EA and Respawn are you giving us a live action trailer instead of something from the game?" Of course this is nothing more than to get you ready for Titanfall 2 to hit the PS4, Xbox One, and PC on October 28th here but it does look like it houses a little more. Hence why it wasn't just tossed aside like the many other live-action videos as of late.

While I still think this would have been better done with in-game footage, this trailer does do a good job of showing the bond between the pilot and the titan in Titanfall 2. Almost to the point that it looks like we may not get the same feeling when playing the game proper. I am hoping that is not the case and that this is just another emphasis on that point of the game, but we all don't know yet. At least it does give us a look at each of the titans a bit more before launch if nothing more than that. Again something that could have been better done with gameplay but I am not in charge of the marketing team over there.

Go ahead and have a look for yourself and wonder the same things as I now. It is a live-action thing for Titanfall 2 so maybe there is a lot of hope behind the game to spend that kind of money to promote it but it still feels like a waste of time in my eyes. Such an odd industry to be in…

Pilot and Titan must Become One in the sequel to Respawn's genre redefining Titanfall. The incredible speed of a Pilot with the devastating size of a Titan, when two combine, none remain.

Are you completely ready for Titanfall 2 to launch here this week? Do you question the need of this live-action trailer for the game as well or have you bought into all the hype and just fell in love again? Do you think that we will get to see this bond truly in the final version of the game or will it be glossed over and just assumed? Let us know what you are thinking down in the comments and discuss. For more on Titanfall 2 as we get it you'll want to stick here on the site. Even if it isn't something huge for the game, we'll have it here just for you to ingest…