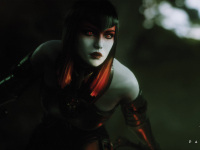 The next hero for Paragon has been announced and detailed out and it looks like we are getting a vampire character in the mix just before Halloween here. Yes, Epic Games is still doing their holiday event with all the skins but here we go with a full on hero that fits the holiday and will be sticking around well after it. Well, at least after she comes to Paragon on October 25th during the usual update that we get for the game on the PS4 and PC when it is time to bring out the new characters. I kind of feel like we all should have seen this one coming but we didn't just yet. Maybe that is just me though.

Here we get to see the Countess in action for Paragon as she uses a few traditional and non-tradition abilities we associate with the creatures of the night. She is also wielding two swords and looks to stick to the shadows of the levels more than anything. Although it doesn't look like she takes any damage when outside of the shadows but wouldn't that be a great twist on her character so we could overpower her in other areas? Maybe that is more wishful thinking more than anything though. That could also break the character horribly if other players just chose to mob her and force a light fight.

Countess is a burst caster whose greatest strengths are misdirection and unpredictability. Utilizing her abilities, Countess can quickly single out and assassinate a key target and vanish into the darkness.

Outside of the look and theme here for the Countess, she looks like a pretty basic kind of character for Paragon though. While having the ability to teleport from neck to neck is kind of a cool feature, everything else is just simply a breakdown of all of the other powers we've seen in the game already. Maybe Epic Games is just running down or out of truly new ideas for characters as we have so many already. Of course there are only so many that could be placed in Paragon before there would have to be some level of recycling going on or the game could become unbalanced and such. Then again, only they would now…

How do you feel about the new character coming to Paragon here next week? Do you agree that she seems a bit recycled or do you see the Countess as a completely new character? Do you think that we've seen the end of truly unique characters in the game or was this just a way to give us something for Halloween? Let us know your thoughts and discuss in the comments below. As more characters and details get fleshed out for Paragon we'll have them up here on the site. Keep checking back in to make sure you get to know all of it as it comes out.