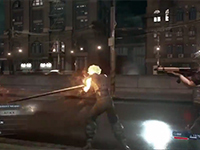 It has been quite some time since we've had some updates on Final Fantasy VII Remake and how it is coming along. I know Square Enix gave us a nice trailer and all of that about a year ago and there have been peppered bit here and there but nothing solid for a while. They are focusing on Final Fantasy XV right now and the various other titles in the franchise so it makes a little bit of sense but that doesn't change our need and want for new content to look and/or hear about the game. Specifically a release date for it but I'm guessing that will all be in due time.

What we do have here though it a nice look at some of the combat coming to Final Fantasy VII Remake in the latest video that has popped up and been making the rounds on the internet. It shows what looks like the opening fight scenes from the original version of the game all done up in the nice, higher graphics and texture based flow we've all been hoping for since the first trailer was shown and then the second one. Hells, even back to the PS3 tech demo that caused such a stir and originally led to nothing. Now we get to see just how they are going to keep the game fresh yet nostalgic as has been the claim for a while now.

It looks like Final Fantasy VII Remake is going to be taking a bit of the active combat we've seen in many of Square Enix's titles as of late including the upcoming FFXV. Fans of the original will know that we had a turn-based system back then and we all had to wait our turn. Now it looks like we can leap from character to character in the team and bring up their menu of commands to perform all while building what looks to be a Limit Break gauge in the bottom right. That at least makes perfect sense to me so one of the great core mechanics is still carried over and we have a bit more control on how it is filled than before.

I know that this new bit of footage is on the shorter side of things and that sucks. I too want to see a lot more on how Final Fantasy VII Remake has progressed as well as when we'll get to play the first episode of the game. Although, rumor does have it that Square Enix is planning on revealing more or at least give us an update during this year's PSX. A fitting stage given that it has been there that we've had the other updates but as of right now that is just rumor and speculation as nothing has been set in stone for the event just yet. It does make perfect sense though so we'll be on the lookout of course.

What are your thoughts on the combat system we have here for Final Fantasy VII Remake? Do you like the new active time system or were you hoping to get a more traditional turn-based system that will fill you with the nostalgia from before? Do you agree that PSX will be where we get our next big update or will it be some other event given that FFXV will have only been out for a few days by the time of this year's PSX? Let us know and feel free to discuss in the comments below. For more on Final Fantasy VII Remake and the franchise in any form, be sure to stick right here as we'll keep the updates flowing for you.

Anon Commenter [ Friday, 7th of October 2016 - 04:36 PM ]
For me, whether I will like the battle system or not comes down to the simple question of "do I have full control of all party members." All attempts Square Enix has made at AI controlled teammates have felt like babysitting. Whether it's Kingdom Hearts, FF Class Zero, FF12 and 13 (haven't played 15 yet) party members other than your active character really only serve as a second and third target for the enemy. Most of the time I would rather play without them. Unfortunately all videos I've seen on the battle system have focused almost exclusively on Cloud solo with just a second or two with Barret in the party. This makes it really hard to determine the direction they are actually going when it comes to party combat, which is really what Final Fantasy games are supposed to be about. With all the current videos, they seem to be more focused on showing us the flashy limit breaks then the actual combat. I will try the first episode when it comes out, but if I don't have full control of all party members, I probably won't be buying the second. I'm quite content with playing the original and the pre-FF11 games if Square Enix once again disappoints.

Anon Commenter [ Friday, 7th of October 2016 - 12:21 AM ]
Ff xiii combat is good enough form of more aggresive turn based combat. They should use it, But they use this action style. And of course square don't care what i think. :D

Anon Commenter [ Thursday, 6th of October 2016 - 04:33 PM ]
I'd prefer the original battle system...but I'm an old timer, and I'm sure Square doesn't care what I think.
Go ahead and login or register