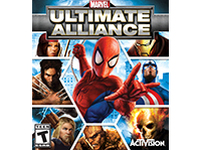 A long time ago we were all introduced to Marvel Ultimate Alliance on the PS2. A game at the time was one of the best that Raven Software had pumped out to us through Activision and thus started a decent partnership for Marvel titles to be done by this publisher. Now we jump forward about a decade and Marvel Ultimate Alliance has been remastered and made to work on the PS4 and Xbox One. We had a chance to check it out and see if the game holds up over the years or if it is something that you should hold out on. Here's our review of the game.

The Masters Of Evil have hatched a horrible plan against the world and have tapped in more villains than could have ever been thought. Thankfully the world has S.H.I.E.L.D. looking out for it and it has gathered its personal crew of heroes to combat those damned villains. All in the sending out of teams of four to make sure they don't get a foothold in their plans and that all of the non-heroes in the Marvel universe are safe and sound.

I never had hopes that Marvel Ultimate Alliance here would have the best of graphics given this is a remaster and not a remake. We are working with PS2 assets here after all. While the models and textures of the game were upgraded, this remaster suffered from not updating the cut scenes in the game. It was just like watching a poor YouTube recording of the original game being played instead. If they would have re-made these cut scenes using the in-game graphics this would have solved my issue here but this is something I see being used to save time in many remasters and it is so jarring to see it hurts my eyes.

Then we have the controller scheme for the game and nothing being done to allow true customization for the controls. Marvel Ultimate Alliance uses a lot of really weird choices that I am sure worked well on the older console but when remastering it here they kept those controls and didn't use any of the new options and capabilities. Again I question why when it wouldn't take too much to do this. It doesn't kill the game at all but it is a huge deviation from standard controls we have become used to over the last ten years and a little updating would have been a nice touch.

If there is one great thing here for Marvel Ultimate Alliance is the fact that the core gameplay holds up over the decade and it still shines here. This is another great sign of not fixing something that wasn't broke and that was the correct choice here. Jumping between the four different characters and still combining their combo moves is simple and fun. Then you mix in the ease of doing the same thing when playing with friends in co-op, it makes the gameplay soar to the top again. Here we have another sign that some of the great game design has been done and needs to be looked at again.

Much like many things that are Marvel, while the dialog would have been nice to have a bit of an update the story was still pretty solid and balanced between everyone and everything. It was like playing one of their well written comics from years ago. I didn't expect the dialog to be altered at all here and outside of some minor nuances it still worked and wasn't as cheesy as I remembered it from before. Of course I was looking at it in terms of reading old comics and none of the newer ones so keep that in mind and you'll fall in love with it all over again. At least if you are a Marvel fan.

If you loved Marvel Ultimate Alliance the first time around and looking for a fun title to play when in the lull between bigger title then this is totally worth the time and money to pick up. It still has some of its old issues or mechanics that have been phased out over the years but they are nothing that can't be easily learned during the game. If you missed out before and not a huge fan of Marvel then you may want to skip Marvel Ultimate Alliance though. It touches a lot on their older material and with the shoddy gameplay mixed in, you'll most likely be kicking yourself. This is a Marvel fan game for certain.

I give Marvel Ultimate Alliance 12 Heroes on the Hero scale.

Marvel Ultimate Alliance was developed by Raven Software and published by Activision for the PS4 and Xbox One on July 28th, 2016. A digital PS4 copy of the game was provided by the publisher for reviewing purposes.