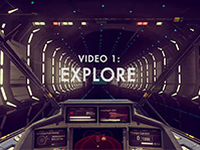 Last we heard that No Man's Sky has gone gold and that August 9th is completely locked in and now it looks like we are getting video break downs of the core aspects of the game. According to the Hello Games these are Explore, Trade, Fight, and Survive. That does seem to be a lot more than I remember them stating before but this is a good thing as it gives me personally more to look at for No Man's Sky as well as to get behind all of the hype the game has produced for so long. I just kind of wish that this would have all been known from the start but none the less, here we go.

The first one out of the gate is the one aspect that has been driven home for No Man's Sky since day one. That would be that of Exploration in the game's universe. Everything from the vastness of space all the way down to the individual creatures that live on the random planets that can be found. Hello Games states that it is up in the 18 quadrillion number of variations available and it is up to us to try and find as much of it all as we can. Something that should be impossible in general unless the game gets us all hooked and takes over just as Pokémon GO has recently. It has the levels of hype and such…

If things are logical here it looks like the next aspect of No Man's Sky will be the Fight aspect. I'm not sure if this means that there will be land grab issues between players or just each player fighting to stay alive while exploring the random planets and the creatures. Not everything in the ecology should be docile but then again neither will all of the human players you run into. The later makes more sense but hopefully it is an all -around fight we need to worry about in the vastness of this new universe to explore. Then we will get laser guns hopefully. None the less we have that to look forward to next.

Does this new video for No Man's Sky give you a better grasp on the exploration involved in the game or not? Do you think that we will only be stuck on the surface of the planets or will there be caves and other things to look at? Will all planets be devoid higher intelligent life or do you think we will see civilizations as we explore? Let us know what you think and feel free to discuss down in the comments below. For more on No Man's Sky and its future videos be sure to stay right here to see them all. We'll keep it all coming as they keep pumping it out.