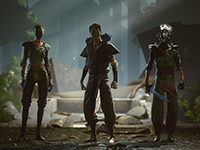 New online combat title, Absolver, has been announced and we have a bit of gameplay for Absolver just before the big E3 reveal

It looks like we have the first of two titles that Devolver Digital has for us at E3 as Absolver has just been announced and came with a nice new trailer. This would be the new title being crafted by developers Sloclap and it aims to bring us all into an online combat world where we all want to become the best there is. I say that as it looks like Absolver is all about melee combat and not the traditional shooter combat that all of us are used to when it comes to online combat titles. It's not the first of its kind but it does look to try and perfect the craft in their own way.

In Absolver we get placed behind the weird masks of a 'Prospect'. This would be the characters in the world who have taken a sacred vow to join the elite group of combatants who have been tasked with keeping the world stable and balanced. We will get to wander the online world to seek out and find other players to duel and hopefully become a better fighter from it. All while collecting new attacks, better weapons, and fortified armor along the way. Sounds a lot like a virtual version of DnD if you remove out all of the role-play aspect of things. That's not a bad thing but it is a thing.

While we have yet to see any gameplay for Absolver even with the above trailer we can get a grasp of what is going on. If for some reason you cannot then you'll have to wait until the Monday before E3 as that is when Devolver is aiming to make the big showing of the gameplay. I'm sure everyone out there will have their coverage of it, us included, but you will have the option to check it out live. They will be showing it off at 5pm PST via Twitch so you can get a look before all of the outlets here jump all over Absolver with their own slant.

What are your thoughts on Absolver here? Does it sound like it will make for an interesting title or just another one to pick up dust? Do you think that the combat will be more skill based or level based when all is said and done? Let us know and discuss in the comments below. As mentioned here, we will be covering more on Absolver as we head out into the future so be sure to keep your eyes glued to the site. As we get all of the new information we will spread it out to the world for you.