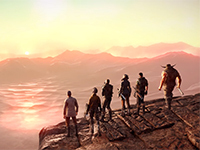 As it looks, you won't be completely alone when you tackle the world of The Technomancer. We knew there were going to be NPCs and other characters to populate the world that Spiders has crafted for us and even that some would be helpful. Now we get to see just how helpful as we have a trailer for The Technomancer devoted completely to just that; the companions. Not a moment too soon either as the wait until June 28th is almost over.

In The Technomancer we will be given access to have two companions tag along with us during the game. Pretty standard party of three style that most RPGs seem to use nowadays. None the less they will be with you and in the mix of the great fight. Of course they will have their own personalities and opinion about your character so how well they help out and perform will be up to you a bit. Read that as don't piss them off or ignore them and you'll do just fine.

Each of the companions will also have their own story to be told in The Technomancer and you can choose to get a better understanding of the character by tackling said missions or not. Of course doing so comes with the added bonus of them not hating you more and also leads to some interesting upgrades and bonuses for some. I know we have at least one character go from having no arm to having a robotic one in the above trailer so that should explain a few things there.

All of the companions will also gain their own XP, level, and make use of all of the gear available to us as well. While they talk about not leaving one behind too long in the trailer above it seems to be more along the lines of gear and not the leveling system in The Technomancer. At least I hear and read it as they will gain the XP even if not in the current party but a level 10 fighter is still going to have the gear of a level 1 fighter if you don't share and upgrade.

What are your thoughts on the new companions for The Technomancer we have here? Does it look like the game is going to be a lot more robust than we thought at launch? What actions do you think there will be that could piss some of them off? Let us know and discuss away in the comments below. For all things The Technomancer keep your browser saved right here. As Focus Home Interactive shares more with us we will pass it along right to you.