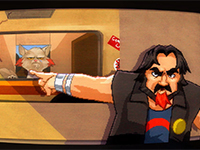 If Dead Island Retro Revenge doesn't sound overly familiar then you may not have been paying attention to the latest Definite Collection that has been announced. That would be one for the titular franchise that Deep Silver is having all polished up for us and releasing on the PS4, Xbox One, and PC on May 31st. You know, the Dead Island Definitive Collection and all. If you are still lost then just know what we are talking about is the nice little added bonus coming with the larger package for us all.

What we have here is a nice little 16-bit side-scrolling title that brings just that extra little spice into the package while trying to hit all of your nostalgia nerves in the process. Now we have our first trailer of sorts to check out the gameplay of Dead Island Retro Revenge to show us how it is going to be the third title mixed in with the other core ones and all of the DLC. Not a bad little bundle even if this part is a smaller little slice based on a few things that were being set up for the sequel back before developers shifted.

Before now the only way to get Dead Island Retro Revenge was through the physical version of the collection. It was a nice little bonus and it apparently upset a lot of the digital crowd out there enough that now it is available there too. Now no matter the way you want to relive Dead Island and Riptide you will also get the little extra bonus of Retro Revenge. Because we all need way more games to keep us occupied and gearing up for the next huge release in the pipes. That's what I am waiting for with this franchise.

Now that you've seen Dead Island Retro Revenge in motion are you more inclined to pre-order or pick up the whole bundle? Do games like this still hit those old nostalgia buttons or do you just want to keep seeing advancement? Do you think this will all link into the inevitable sequel we've been teased with for so long already? Let us know and discuss away in the comments below. For all things Dead Island keep your eyes right here on the site to make sure you can take in every little bit we have to offer.