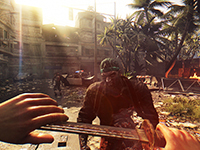 We've had some nice new screenshots for the Dead Island Definitive Collection to see just how the upgrades have come along for the game but now it's time to see it all in practice. That is to say that we have some new gameplay footage for the remastered titles to spy upon here from Deep Silver to get us all pumped up for the games inside to land on the PS4, Xbox One, and PC this May 31st. Hopefully just in time to get us all settled and ready for a possible Dead Island 2 update of some sorts but that could still be a bit of a ways off…sadly…

Of course this isn't much of a how to play the game kind of trailer but more of an accolades trailer to show off why we need to pick up the Dead Island Definitive Collection but at least there is a fair amount of gameplay with the high resolution textures and characters running around. It also serves as a great reminder of how this franchise, and really genre, took off and brought us along for a fun ride. How many more zombie apocalypse style games will we get to see where crafting and non-traditional locations to be set it? Many more I am sure.

If you stay around to the end of the trailer here you may have spotted a new little tidbit coming in this bundle. You may not have though. None the less it looks like Dead Island Retro Rampage will also be added into the retail version of the bundle for the low price of free. This would be the top down shooter that we've experienced in the franchise before but those who go physical will get just a little more bang for their buck. I have a feeling it will come along to digital formats at some point but as of now that is the only way to get the added game in your game.

Are you jazzed to see how polished the Dead Island Definitive Collection is looking now? How about that little extra added in for the physical disk adopters of the bundle? Do you think that will come along to all of the digital people or is it just a nice bonus to entice pre-orders elsewhere? Let us know your thoughts and feelings in the comments below. For more on all things Dead Island be sure to keep yourself locked into the site here. As more comes we will pass it around as the zombie brains flow.