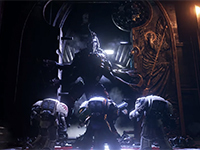 It's been over a year since we last had any kind of look at Space Hulk: Deathwing. There have been a few updates here and there out of Streum On Studio to let us know the development is still flowing and they are using Focus Home Interactive's money in the proper way but we have yet to see much in the way of gameplay. Space Hulk: Deathwing is slated to release sometime this year on the PS4, Xbox One, and PC so it would be nice to get to see something well before the release and not a few weeks out. I know I'd like that at least.

Thankfully we have a new gameplay trailer to spy upon here for Space Hulk: Deathwing filled with all kinds of information on the game's world and just how in-depth the combat system of the game will be. There will be localized damage and we'll have to work around all of that and fans of the Warhammer 40K universe will get to explore a lot of the icon ships from the lore. They'll be able to do that in a squad of online multiplayer friends or just a few AI bots helping them out along the way. Either way we have new gameplay to look at and details to take in.

Full disclosure here for this gameplay. This whole clip is made up of a lot of what was shown behind closed doors at E3 last year. There are a few new bits added in but in terms of completely new footage for Space Hulk: Deathwing it is kind of light. Most of what we spoke on in the past was based on a demo that played out quite similar to this one so not much more to add on to. At least the general public and other fans get to see just what the game has in store for us all. I'm not even huge into the universe that the game is built around but my interest has been greatly piqued.

What say you about the newish gameplay for Space Hulk: Deathwing here? Do you see yourself enjoying the 10-15 hours of gameplay with the AI or with some friends? Are you super excited to be able to fully explore ships that you only read about or slightly glimpsed before? Let us know and discuss everything in the comments below. For more on Space Hulk: Deathwing and any other aspects soon to come be sure to keep yourself glued right here to the site as we will bring you everything we can as it comes.