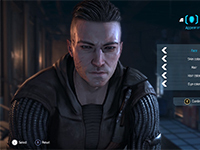 If the announcement of The Technomancer's release date didn't get you all tickled for the game, it most likely didn't do much, then let us have a look at some new gameplay. The reason I would say it didn't do much before is that Spiders hasn't released all that much in terms of gameplay near the final approach of the game's dev cycle. We were still working off early footage of The Technomancer but now we have some solid and what can be assumed to be gold level gameplay here. Why Focus Home Interactive didn't bundle the two into one big press release I do not know but here we go.

Unlike all of the other footage we have had for The Technomancer this one gives us a solid look at pretty much all of the aspects of the game announced so far. The most interesting thing here is that the game's visuals have advanced so far that it is hard to believe that they are recycling most of the footage we saw at last E3 for the game. At least in terms of enemies, locations, and combat. Feel free to compare if you don't want to take my word for it but they are all the same shots; only this time they look spectacular and not low grade at all.

See what I mean here for all of the visuals? The Technomancer looks like it is going to go leaps and bounds over Spiders' last few titles and this has me extremely excited. Mainly because I love when developers are able to perfect their craft and get their true final visions out to us instead of just the best that they can do at the time. I don't think I've been more excited to give this game a go since I first heard of the concept. So very excited now to see it land on June 21st.

Enough on me gushing here, what do you think about The Technomancer now? Do you see the great leaps forward in the visuals from where it was when the game was first announced? Do you think all of this is going to be purely cosmetic and the combat still be a bit on the clunky side as shown before? Let us know your thoughts and discuss in the comments below. For more on The Technomancer and everything it has to offer be sure to stay right here as we will give it to you as we get it all.