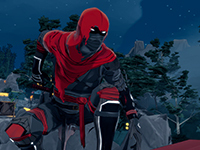 A new stealth game, Aragami, has been announced and slated for later this year as Aragami marries great aspects from other games in the genre

Hopefully you are in the market for another stealth title as Aragami has now been announced and heading to the PC and PS4. All of which is coming out of Lince Works as they aim to bring us all back into a genre that is known and loved. In fact when you first look upon Aragami you will see all kinds of elements from Tenchu to the most recent Thief and Dishonored titles. At least those are the titles I was able to spy in the following announcement trailer for the game.

In Aragami we will be taking on the role of an undead assassin of the same name. He will be using all of the supernatural abilities that he was able to bring back from the grave to bring down the heavily fortified citadel of Kyûryu. You know someone there has to be up to no good and armed with the powers and a mysterious girl named Yamiko he will bring the Army of Light crashing down. So a very basic 'save the world' kind of story then.

From the sound and looks of things Aragami will be able to actually control the shadows of the game's world and use them to his ends. Be it a minor version of teleporting to actually calling forth shadow demons to devour his enemies. That is of course if all of the master assassin skills fail you and you are spotted. Something that seems to be indicated on the cloak that the character is wearing. That again sounds extremely familiar now doesn't it?

Currently Aragami is slated for a Fall of 2016 release by Lince Works. They are aiming for a PS4 and Steam release which will include Windows, Mac, and Linux. It looks like the team is off to a great start and I hope to see it come into its own light here soon.

What do you think about Aragami here? Does it looks like a clone of a lot of other great stealth games or does it look like it is taking the best parts of those games and making it all one? Does it feel like this could be a start to another Tenchu-like franchise for us all? Let us know what you are thinking and discuss in the comments below. For more on Aragami and other titles like it be sure to stay right here on the site as we will bring you more as we get it.