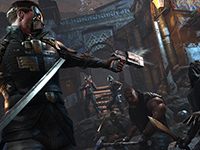 If you've been waiting patiently to get your hands on The Technomancer we finally have a date you can set on your calendar for it. It looks like Spiders is going to have the whole game wrapped up and ready for Focus Home Interactive to ship out on June 21st now. Before now there wasn't even a solid time frame for when The Technomancer would be hitting the PS4, Xbox One, and PC. Soon we will be traveling to another version of Mars and killing all of the weird things that don't fit in.

Now if this is your first time hearing about The Technomancer this is another action RPG game that places us in the middle of a weird conflict on Mars. We take on the role of Zachariah who happens to be the titular character in question here. He happens to find out a huge secret and then needs to save himself and the underclass of other people that happen to be under the boot of racism and the powerful corporations of Mars.

As a refresher The Technomancer will also employ three different fighting styles during the game and we will have to find which one fits our style as well as the situation of the game. All with the usual RPG style of upgrading and progression. Now we just have to wait to see it all in a final form since the game is now slated to launch in two months now.

Are you still hyped to play The Technomancer? Are you still on the fence about even giving the game a try? What are your hopes for the game when all is said and done? Let us all know what you are thinking down in the comments. As we get more on The Technomancer in any form we will be sure to have it up on the site here just for you. Be sure to stay locked in for all of that as it comes.