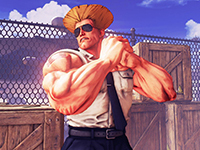 The character DLC for Street Fighter V keeps on rolling out as we have our April DLC confirmed here. Although Capcom might want to get on top of whole announcement to release schedule thing here as we are almost at the end of April and now we are only hearing about Guile coming back to the franchise sometime in the next few weeks. Well the next 12 days from right now if we are truly going to be getting a new Street Fighter V character each month leading up to September. That would get us all of the six mentioned characters as planned.

As of right now Guile will be another free downloadable character for all until the Zenny Shop opens up. At that point you'll either need to pick up Guile with Fight Money or already have picked up Street Fighter V's season pass. He'll still technically be free in terms of real money, you'll just have to have already spent the time to earn all of the Fight Money to make sure he doesn't go back into the "trail" phase of things and keep the Sonic Booms flowing.

In terms of fighting it looks like Guile will be employing all of the same old moves and tricks we knew before Street Fighter V. Of course he will have a V-Skill, V-Trigger, and Critical Art on top of all of that and it looks to all be focused around the signature Sonic Boom move. The V-Skill giving a static projectile that beefs up the general ones, the V-Trigger allowing Guile to hurl out more at different speeds to trip up the enemy, and the CA causing a full on Hurricane of Sonic Booms to devastate all.

On top of all of that the first Stage DLC for Street Fighter V is also coming and announced with Guile's Air Force Base stage. The current plan is for it to cost 70,000 Fight Money to unlock but for all of those season pass holders it will also be free as Capcom's way of saying thanks. Who doesn't like free stuff or technically free stuff? Not many that is who.

Are you shocked by the addition of Guile into Street Fighter V now? Were you hoping for a bit more of a mix-up when it came to his moves and skills or is this what you wanted? Who do you think will be the next fighter and/or stage to be heading our way next month? Let us know and discuss as you will down in the comments. For all things Street Fighter V and its DLC be certain to stay right here for all of that. As the news breaks out there we will do our best to get it out to you as well.