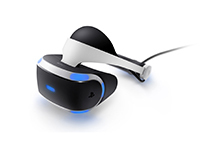 Sony isn't kidding around here for the PlayStation VR as they confirmed that the bundle will be $499 USD and up for pre-order on March 22nd. It will include:

Looks like there was a lot of outcry about the PlayStation VR set not coming with a camera or Move controllers. While the camera is required to use the system the controllers are not but many developers are building titles with the idea that consumers will have them. It looks like the original reason Sony wasn't bundling things before was the fact that "most users already own them" but due to the outcry it looks like it is now planned. Currently the camera is $60 USD standalone and one Move controller is $50 USD. The bundle has yet to be priced but if they went "at cost" the whole thing could set you back $550 USD for camera and two Move controllers.

We all knew it was coming and now it has as we have a price and release window for PlayStation VR. Looks like many were right as the news did indeed come out of the press event that was held during GCD this year. Now we can all look forward to PlayStation VR adding on to the fun of the PS4 sometime in October of this year. That and all for the price of $399 USD. Much lower for the headset than all of the others out there that doesn't use the power of your cell phone to give you the experience.

So what will we be getting for that price point? Well it looks like we will be getting the PlayStation VR headset, of course, the processor unit, all the cords to connect the headset to the PS4, a set of headphones, and all of the power supply cords needed to keep the beast all powered up. I am just curious if this means that we are going to be down yet another USB slot on the system for plugging in or if the connection cable goes in somewhere like the camera cable does. I am sure we will find out soon. Today more than 230 developers are building content for PlayStation VR, from smaller independent teams to larger studios at the industry’s top publishers. We expect to have more than 50 games available from launch in October 2016 until the end of the year. Of course, the full promise of PlayStation VR will continue to grow over time as talented developers create new experiences and new genres that wouldn’t be possible outside of VR. The future looks bright indeed.

Additionally, The Playroom VR, from our very own Japan Studio, will be available as a free download from PlayStation Store for all PS VR owners at launch. The Playroom VR will include six games that can be enjoyed with friends and family, demonstrating why we believe VR can also be an impactful experience when it’s shared.

It is worth noting that the PlayStation Camera is required to use the PlayStation VR system and it is not included in this first announced box. Also not included are the PS Move controllers that will give us all the free movement of the hands in any VR experience. This of course is not a huge issue for many early adopters of the PlayStation hardware as most that I know have all of these things already but for new adopters it will be a slightly extra cost on top of the $400 previously mentioned.

When all is said and done though the PlayStation VR system does look to be the cheapest out there, even with the added requirements, given the fact that if you are picking one up you already have a system powerful enough to run all of the VR games and experiences. Something that the PC VR headsets still cannot fully boast as of yet. So it is worth taking in some perspective as we wait to see if Sony is going to give a full PlayStation VR bundle that includes everything a true new customer would need to get it up and running.

What do you think about the PlayStation VR price point? Are you more or less excited for October of this year given the release window we now have? Will you be skipping over the PlayStation VR given the extra needs required or are you already perfectly square to plug in and go on day one? Let us know and discuss away in the comments below. For more on this and all other things VR keep it right here so you can be fully up to date.