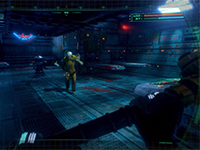 It was out there in the ether of the internet for a while now but here we go with actual footage of System Shock. Don't think you've lost your mind or anything but it looks like Night Dive Studios has opted to show us all how much work they have placed into remaking/remastering the classic System Shock for the Xbox One and PC. I bet you thought they had dropped it all just to work on the third title in the franchise that was just announced not that long ago. You would be wrong.

What we have below is the first pre-alpha gameplay footage for System Shock Remastered. They are rebuilding the game in Unity just for us and it looks like it won't be a brick by brick remaster of the title as there will be a few things changed up to better fit what they team wants. The most notable here being the interface layout and of course the upgraded-but-not-fully-upgraded visuals for the levels and enemies. Have a look for yourself and see what I mean here.

After 20 years, we are remastering and re-imagining the original System Shock. We will keep the new game true to the classic experience, keeping all the things you loved, while updating the user interface and graphics to use a modern day engine (Unity).

It is odd to see that while Night Dive Studios is using an upgraded game engine to rebuild and remaster System Shock they are not going out of their way to upgrade textures and models as much. This could be due to the fact this is still pre-alpha gameplay but it does look like they are keeping the classic look and feel in those regards. I am hoping that is the case as some of the levels here look fully upgraded and what would be the point of placing System Shock on a new game engine but leaving all the same old junk in place?

What do you think about the new footage of System Shock Remastered though? Do you see the same drawbacks as I do here or do you think it is all because of the pre-alpha stage? Are you curious on why they are only going with the limited platforms for release and hope they expand to a broader audience as time goes on? Let us know what you think and discuss away in the comments. For more on System Shock Remastered and all of the other titles linked in, be sure to keep your attentions right here as we will update as we can.