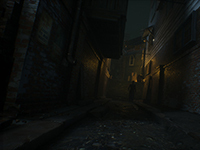 Yes Vampyr is still in production and still slated to hit the PS4, Xbox One, and PC sometime in 2017. It was a very silent announcement from Dontnod back when wind was first pick up for it but as Focus Home Interactive has been doing over the last few days we are getting another push and another reminder that the game is coming. This time though we are getting more screenshots for Vampyr and not just a quick reminder to keep us all salivating for more as the title may imply. At least for you blood suckers out there.

While we do get a few more screenshots for Vampyr we don't get much more in terms of details and game mechanics for the game along with them. It does look like 1918 London in the midst of the Spanish Flu epidemic is being crafted well but setting and visuals don't always make a game. Thankfully it does look like Dontnod is on top of that as they are creating each character in the game with their own back-story and importance on the world. An importance that could completely change how Vampyr plays out if all is done just as well as claimed.

The emphasis on NPC stories and consequences stems into the main character's need to feed in Vampyr. He is a bloodsucker and needs the red stuff to stay alive and to further his supernatural power. But it looks like with the aforementioned stories and consequences just murdering anyone you so choose in Vampyr is not the option. Once a NPC is dead they are dead and there is backlash to be handled. There is no world on how harsh that could be but it sounds like causality is going to be another huge thing they are putting into Vampyr.

Of course as we are playing a doctor of the times we will have other options than to drain the bodies of the world. We won't have to be too picky in Vampyr if we plan ahead as we will be able to craft items to keep victims alive and breathing if we so choose. I'm not sure if it will be to the extent of being able to kill no one but it won't be as harsh as the original sounding game mechanic of having to choose extremely wisely. Just mostly wisely now. All of which makes total sense.

What are your thoughts on how Vampyr is shaping up in the visual form here? Are you glad to see that Dontnod has given some options to us to make sure we don't always need to kill our victims in the game? Do you think it will lead to a play though that is completely pacifistic in terms of the murder? Let us know and discuss away in the comments. As Focus Home Interactive decides to hand out more on Vampyr we will have it here for you. For all of that and more stay right here on the site.