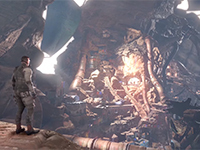 Hopefully by now you know that The Technomancer is taking place on Mars in the future sometime. It has kind of bee the highlight that Spiders has been pointing us too quite often in their gameplay videos. We've also already seen a nice little subsection of that. Now that we are moving closer to the summer release window for The Technomancer on the PS4, Xbox One, and PC I guess it is time for us all to have a nice little look at those locations that we are going to be heading to so we can see new lands and creatures just for us to kill…

As you have most likely figured out by now Focus Home Interactive has given us another new trailer for The Technomancer and it shows off just what I was talking about above. At least in terms of the "exotic" lands that we will have to sneak through so we don't get hunted down by the corrupt police force that is certain we are out to destroy the faux-utopia that really isn't Mars in this case. You know, because we have the secret that they want hidden forever and instead of working with us they are going to hunt us down and kill us.

In terms of updates this is really all we have for The Technomancer as no extra story or game mechanics are touched on here. More or less this is just here to serve as a reminder that Spiders is still working hard on the game and it is coming. Something that could have been done better in way of a developer diary but at least we get to see their Mars with some non-Mars music playing over in the background. Just in the true way we should always see videos like this right?

The Technomancer — Life And Death On Mars

What do you think about the world crafted here for The Technomancer now? Does it look like it will be just as amazing as I am sure Focus Home Interactive is hoping the game will be? Are you hoping that some crazy Total Recall style areas will crop in the game in some way or is it just me? Let us know and discuss in the comments below. As more on The Technomancer is revealed we will have those updates here on the site. For all of that and other things in video games keep it here so you can be fully informed.