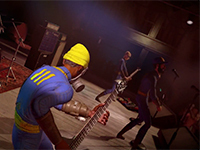 It looks like even Rock Band 4 cannot get away from the Fallout 4 fever that has been taking over the world as of late. In the next major update for Rock Band 4 it looks like Harmonix is going to mix in some new gear all based on the post-apocalyptic title for all of those fans who can seem to put Fallout 4 down long enough to enjoy a good old night of Rock Band 4. Seems like a daunting task for those gamers but it is something I can see them at least trying. Rock Band 4 deserves it and the wasteland needs some time to fill back in all of the dead enemies right?

From the looks of it the items added will include a Vault 111 jump suit and a Pip-Boy add-on for anyone who would want to rock that in Rock Band 4. From the looks of the trailer it looks like it will all be added on at no real world charge as well. Another great incentive for those who need to put down Fallout 4 for a bit and rock out with Rock Band 4. I am hoping that other gear from the franchise will make it in but as of right now this is all we have. At least it is something.

These new bits of gear for Rock Band 4 will be made available on December 8th when the next update goes live. This update will also include some calibration improvements, variable breakneck speeds, a new score challenge feature, and many other things that you can check out over on the Harmonix website. I'm going to guess that we need to wait a bit longer for any of the music from Fallout 4 to make its way over to Rock Band 4 but that is just something we will have to endure. That is a S.P.E.C.I.A.L. stat right?

What are your thoughts on Rock Band 4 getting Fallout 4 themed gear? Do you think that the players of Fallout 4 will put the game down long enough to be able to enjoy it? Do you think that this is just the start for cross game promotions in Rock Band 4? Let us know what you think and discuss until the world ends in the comments below. If there are further updates from Harmonix on this or anything else Rock Band 4 we will have them right here. Be sure to keep tuned in here for more.