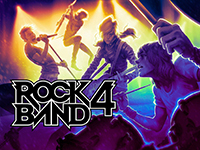 We Sit Down And Review Rock Band 4. Is it time to bring the rhythm game to the next gen or should it have been laid to rest? Here's Our Review of Rock Band 4

It has been some time coming and now we have Rock Band 4 released and in the hands of all the rhythm game fans out there who wanted this revival. I know I was among the ranks there and was glad to see that Harmonix had listened to us and brought Rock Band 4 to light. I am also glad that I was able to get my hands on the final version of the game and was able to experience the title that is the start or bringing more music to video games. Enough on the gushing for now as it is time for my review of Rock Band 4. Let's take it away now…

This is the story of Dwarf Cooter, my personal band, as they climb the ranks of musicians trying to be the next "big thing" out there. They started from humble beginnings and stayed true to the fans. That is until one of the fans gave them head lice and they chose the path of making it big so they never had to crash on the floor again. All of which led them to bigger and better venues and shows in Rock Band 4 until Dwarf Cooter became the rock gods that we all know a band like them should be. Get the hall of fame ready for Dwarf Cooter now!

One of the biggest selling points for Rock Band 4 was the fact that most controllers where going to be compatible for the PS4 version of the game and the Xbox One version if you purchased the adapter. From what I have been able to tell so far they are. Sadly though they are compatible enough to make you want to shell out the extra cash and just repurchase all of the equipment again from Mad Catz and call it a day. Of course that would be nice if standalone Rock Band 4 controllers were available to the mass market. As of this review they are not and the delay between my Rock Band controller and Rock Band 4 game require almost constant re-calibrating to make sure notes are not missed and all.

For those just getting into the franchise with Rock Band 4 there isn't much of an issue for you as there are many options for you out of the gate. The hardcore fans who have been collecting controllers from day one are going to find this to be one hell of a ride as you wait for the new controllers to become available. Of course that is if you just didn't throw cation into the wind and purchased the bundles and the non-digital version of the game. While the old controllers do work I don't find them doing Rock Band 4 or Harmonix justice with the game at all. So much lag.

Also not doing the franchise any justice is the very lackluster on-disk set list that Rock Band 4 shipped with. Don't get me started on the forced U2 song that you start the career with. Most of the songs shipped with Rock Band 4 do not feel like the songs that you want to spend hours with playing over and over again. In fact if it wasn't for the mass amounts of DLC songs that I already owned and Harmonix had ready for launch I am not sure I would have pressed through with how boring a lot of the on-disk tracks are. This could have been a ploy to sell more DLC but for new players I am not sure if they will want to make the move far enough to do that.

Speaking on DLC, the Rock Band 4 store for the DLC songs is very shoddy to say the least. This could be in conjunction with how the PSN and Xbox Marketplace handle it all but it was almost a nightmare to try and claim all of my old songs again to get my track list up to about a thousand in Rock Band 4. I have a feeling that this will be streamlined in the future as the launch passes and the first wave of patches come out but for seasoned Rock Band veterans like myself it took about three hours to sift through and download all of my old DLC for the game. I am still missing some as the UI shows it purchased but will not let me download. Be warned there.

It's funny to say but I think the Story mode of sorts for Rock Band 4 was a huge success for me. The whole idea of Rock Band 4 was to give you the feeling of living the rock star life and the choices some bands have to make along the way. Of course it didn't do much besides unlock free items in the rock shop but the little extras like shaving all of the characters in the band bald due to the lice outbreak added a little something to Rock Band 4 for me. It wasn't just the same chose a town, play a show, strum and drum a lot, rinse, and repeat. I really felt like I was part of Dwarf Cooter in a way and that is a good thing…and a weird sentence to write.

Another of the new features added into Rock Band 4 that almost made the Hated list was the new Free Style solos. This would be the feature that Harmonix added to songs that allows you to create your own solo instead of playing the one that the song came with. It almost made the hated list as in some cases it ruined the song as some of the solos are so iconic that you want to play that and not go free Style. Why did it miss that section though? Because there was nothing more entertaining with Rock Band 4's slower and boring songs than being able to rip into a death metal inspired solo to liven things up. Not only did I have fun laughing at it but others around would cheer on and enjoy the mash up, thus making Rock Band 4 that extra bit of fun.

Last up, and another saving grace for Rock Band 4, is the fact that Harmonix didn't muddle with much else for the franchise and brought back everything we loved with new twists; DLC songs included. I may not have enjoyed many of the songs that came on-disk for Rock Band 4 but having 97% of my back catalog pretty much ready to go and get into the mix was amazing. It brought back all of the joy that I personally had with all of the other Rock Band titles in the franchise and that is what the video game should be about. Having fun and rocking out to some amazing music in the mix while feeling like a rock star even though you are only really an air-rock star at the end of the day.

Plain and simple, if you enjoyed Rock Band in any of its incarnations from before then Rock Band 4 is going to be a game you want to buy and bring out for parties. Of course you'll have to spend more than the starting price to get back into it all the proper way given the lackluster on-disk track list and the lag time that comes with not having the newest and shiniest controllers for Rock Band 4 but that is really the nature of the beast when it comes to this franchise. Who out there who has owned and enjoyed Rock Band in the past can claim they never wanted to buy the DLC or needed to but a new controller as the old one died out. All of the fans have and those are the biggest issues I find with Rock Band 4.

There are a few minor software issues I did find with Rock Band 4 but given the market today and Harmonix's dedication to the fans by the time most old school fans can purchase all the new controllers as standalone items the UI and song options will be expanded beyond the limits we had before. I completely recommend Rock Band 4 for the newbies to the franchise but the hardcore or older fans may want to hold off for just a bit. Not everything is backwards compatible yet.

Rock Band 4 was developed by Harmonix and published by Mad Catz for the PS4 and Xbox One on October 6th, 2015. A digital copy of the game was provided by the publisher for reviewing purposes.