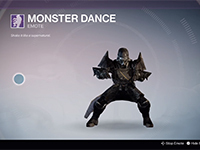 With Halloween almost here, for those who celebrate the holiday, it looks like Destiny is getting the jump on all of the festivities before many of the other games out there. As we get closer to the 31st of October I am sure we'll see more but for now it looks like Bungie is out of the gates and offering up all of the same old fun that MMO players should be used to for Halloween. Well outside of the holiday specific emotes for Destiny that you'll be purchasing and making sure that Activision can stay in business for another year. Not that there would be any doubt in that though.

Anyways, as it goes for Destiny players who log into the game will be treated with a decorated Tower with almost all of the NPCs, and most likely PCs, decked out in costumes and masks of some sort. To go with that there is the traditional special event, Festival Of The Lost, that is going on with its own Halloween inspired missions to gain candy and other masks to wear during the event. This even for Destiny lasts until November 9th and of course begins as of today (October 26th). The same time frame that all of these goods and fun can be had in Destiny.

What is a bit weird is that there are also some new character emotes for Destiny just for this event. Also pretty much the standard for Halloween as they are basically "Thriller" dance moves that are always the rage. These can be purchased for Destiny in-game silver that can be purchased with real world currency. 1500 silver will score you all three as long as you are on the PS4 and Xbox One side of things for Destiny and these will, thankfully, not go away after the festivities end in the game's world. I guess that is good given the real world costs. Still an odd thing to charge for in my opinion but there you have it for Destiny.

What are your thoughts on the Destiny festivities for Halloween here? Does it make sense to have emotes for the game that are holiday specific cost real money even if they persist after the event or should they have just been included and vanish after the end date? Do you think that Destiny will be getting this for all the major holidays that Bungie thinks are important as we go forward? Let us know and discuss in the comments below. If we hear more for this and other aspects of Destiny we will update so be sure to keep looking forward to all of that here.