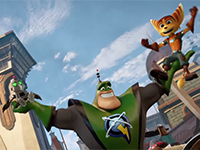 Also, you can consider yourself lucky you live in the information age as this new trailer for the Ratchet & Clank Movie is currently slated to be shown just before the theatrical screen of the new Goosebumps film. That film was well done and worth a viewing but I know some of you out there only want to see the Ratchet & Clank Movie trailer with none of the other stuff involved. For those individuals we have the new trailer just below to see how Insomniac Games' IP is being brought to life. So to say…

I am practically tickled pink with seeing this new trailer for the Ratchet & Clank Movie. I am just saddened that we will all have to wait until April of 2016 to get to see it on the silver screen. That and play the new Ratchet & Clank game that is coming along with it. Hopefully things are not going to be forced between the two mediums and Insomniac Games will be able to put out the top-notch Ratchet & Clank experience we've all come to love. Well, at least most of us have grown to love. Games and movies don't usually cross over well and we know this.