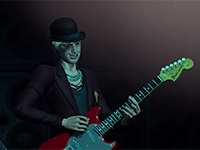 Rock Band 4 still has another week until it launches on the PS4 and Xbox One but that doesn't meant the updates will not flow with them. In fact we have two new updates for Rock Band 4 straight from Harmonix's mouth just for you. Yes you and only you reader. Everyone else gets to miss out. They get to miss out on the free Rock Band 4 update that has been announced and the DLC tracks that will be a first for any rhythm game to date. I'll stop teasing and dig into the first of the two updates for Rock Band 4 now. Just for you and only you.

So first up it looks like Harmonix has announced and dated the first major feature update for Rock Band 4. It will be free for all, including you reader, on December 8th for all platforms. This update will house a few new social features not making it into the base version of Rock Band 4 as well as competitive features. I'm guessing leader boards but it could be more. The big thing here though is thatRock Band 4 will be getting a Variable Breakneck Speed feature that will allow you to control the note scrolling speed for each track in Rock Band 4. It's been a requested item and now with Rock Band 4 we are getting it.

The second bit of update is that for the first time to any rhythm game, starting here with Rock Band 4 of course, it looks like U2 is allowing their tracks to be added into the mix starting with two. You can see the two tracks below but it looks like Rock Band 4 is getting the Apple treatment with the U2 songs in the mix. As of right now it doesn't state if these will be paid DLC songs for Rock Band 4 or free but I am going to bet on the prior unless Harmonix got some cool deal set up here. They did get something set up in case you don't like these two tracks for Rock Band 4 as it sounds like more U2 songs are on the table…yay…

How does this tickle your fancy for Rock Band 4 now? Have you been hoping for the Variable Breakneck Speed settings to make it into Rock Band 4? How about the addition of U2 into the track lists by Harmonix? Could you do without the latter one there? Let us know in the comments below and discuss until the cows come home. That reader we mentioned before would love to see something else in here while they wait for the next big update for Rock Band 4 I am sure. Just as I am sure we will have it here on the site once it is let into the wild for us all.