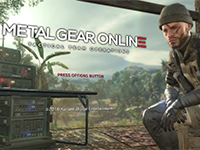 If you are like me then you are still wrapping up Metal Gear Solid V: The Phantom Pain's main campaign mode. I swear we will have a review up here soon. If you are also like me then you have been excited to see how Metal Gear Online is going to play out and expand the The Phantom Pain experience further than it already is. The game doesn't need a multiplayer aspect to keep the gameplay going but Konami did promise a new Metal Gear Online and we had a small taste already. It was a while ago but we did and now we get to see it a bit more in action before it hits the PS3, Ps4, Xbox 360, Xbox One, and PC on October 6th. I am going to have to balance Rock Band 4 and Metal Gear Online now? Gods damn it.

Anyways, at the Tokyo Game Show Konami brought a bit more for us to see for Metal Gear Solid V: The Phantom Pain in the way of modes and gameplay for Metal Gear Online. This will be a free update for everyone who honored Kojima Productions' last title by buying it and will feature a lot of the same gameplay that has made The Phantom Pain so amazing so far. Only thing is that in Metal Gear Online the enemies will be live players and not AI bots that you will have to outsmart. Also in Metal Gear Online you will not be on the same style missions as each mode has something new to bring to the game and the gameplay experience.

For starters, as no one is as bad ass as The Boss in Metal Gear Solid V all characters will have to select a character type based on one of the three aspects of Snake. We have the Infiltrator, the Enforcer, and the Scout. For the most part in Metal Gear Online the name sums up what each will be doing, what gear types they will have, and the overall gameplay involved. As you will see below they are not completely forced into said role 100% and have a bit of freedom when push comes to shove in Metal Gear Online but they will tend to stick to the roles for maximum efficiency. This of course makes perfect sense given what is set up in The Phantom Pain proper.

Konami has mentioned that there will be multiple modes in Metal Gear Online but as of right now have only shown off one: Bounty Hunter. In this mode it is a free for all between the two squads where the team with the most number of "tickets" left wins the match. As enemies are eliminated their score goes down. As they kill your side, your score goes down. Pretty standard stuff. What makes this Metal gear Online mode a bit more interesting is the fact that if you Fulton out enemies during a Bounty Hunter match, their bounty score adds back to your total "tickets" in the system. Each member of the squad has a different bounty score in Metal Gear Online, presumably based on player rank, so this could quickly turn the tides of a match and lead to a win from behind.

It was also mentioned before for Metal Gear Online that iconic characters would be available for play in matches. As of right now it has only been shown that Boss and Ocelot will be playable with their own specific moves from Metal Gear Solid V proper but I am guessing this will expand as time goes on. There is also no word on how these characters will be available in Metal Gear Online but we do get to see that Boss will have the rocket punch and Ocelot will be able to ricochet bullets off the level to hit hidden enemies. Just as they always should here.

You've seen more of Metal Gear Online in action but do you think it is worth the wait here? Do you even think that Metal Gear Solid V: The Phantom Pain needed a multiplayer to expand the game further than it already reaches. How long until Konami begins to charge for "premium" content for Metal Gear Online? Do you think Kojima Productions would ever see that money if they do? Let us know and discuss down in the comments below. Hopefully we will have more to look at as we get closer to Metal gear Online's release date and when we do you better know we will have it here for you. That and our full review of Metal Gear Solid V: The Phantom Pain.