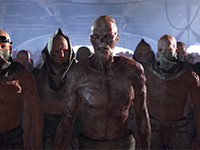 For the most part this new trailer for The Technomancer is just an attempt to make sure we have not forgotten about the game by Focus Home Interactive and not really give us much more to go on for the game. Seeing as we still have half a year at a minimum before The Technomancer hits the PS4, Xbox One, and PC this is not much of a surprise to me. There wasn't all too much for The Technomancer to show off at neither E3 nor Gamescom so it is really just in the "hey we are still making the game" state of development. Can't blame them for wanting to make sure this game from Spiders doesn't fall out of view before the next big push. Maybe something at PAX? We'll have to wait and see.

I leave you now to have a look at the latest trailer for The Technomancer. Hopefully you enjoy it and this will keep you looking out for more on the game as the developers finally get to a solid point to show off more. Here's The Technomancer.

You've now been reminded that The Technomancer is still in the works now right? Or did you see something telling for the game that has yet to be released to the public at large? Are you still fully interested in The Technomancer here or does Spiders Games have a lot more to do to capture your attention again? Let us know down in the comments below. Hopefully we will have more for The Technomancer from Focus Home Interactive soon and when we do you won't want to miss out. You can read that as keep checking in and checking in often for more The Technomancer.