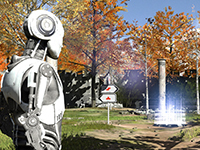 We thought the day may never come but it looks like The Talos Principle finally has a release date for the PS4 after almost a year of being on the PC/Mac and months after hitting Android. It would seem like Croteam and/or Devolver Digital were taking their time to get the jump into the console market at first but then we get to find out that it's not only The Talos Principle but a Deluxe Edition with even more puzzle goodness that will be hitting the PS4 on October 13th. Yea, so take that all of you non-believers and pirates of The Talos Principle. It's coming and now we have a solid date in the middle of all kinds of other madness that will be going on in October.

For those not of the PC gaming persuasion, The Talos Principle: Road To Gehenna was an ambitious expansion pack for the original game that adds not only twenty new puzzles to solve but many extra hours of gameplay according to Devolver Digital. Many more hours of thought-provoking and puzzles for The Talos Principle to almost completely quote. None the less you are getting it all together and in October now. I guess it is good to have to wait sometimes. We wouldn't want to have to pay for The Talos Principle: Road To Gehenna separately now would we? No. No we would not.

Are you excited to see The Talos Principle finally come to the PS4? Would you have wanted it on another platform or still do? How about all of that extra expansion stuff coming bundled along with it? That has to be another great selling point for Croteam here doesn't it? Of have you already played it and want to spoil the fun for others? Let us know down in the comments. As we get more information for The Talos Principle: Deluxe Edition we will of course share it on out so make sure to stay locked in here on the site. You don't want to be a Sad Sally when everyone else knows and you don't.